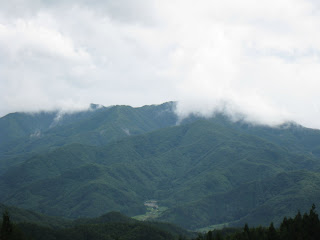 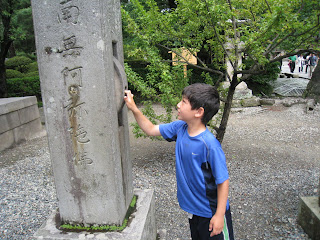 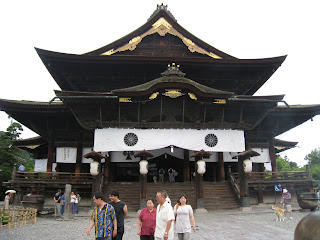 Nagano, well known as host of the 1998 Winter Olympics, is also home to Zenko-Ji, a 1300 year old Buddhist temple that houses an image of the Buddha from the 6th century. It is believed to be the first image of the Buddha to arrive in Japan. Sho and I spent the morning exploring the temple, including an exciting search for the "key to paradise" in the Okaidan, a pitch black tunnel underneath the main temple chamber. This search prompted Sho to ask me what it means to achieve enlightenment.

"It's hard to explain," I answered. "But my guess is that it's kinda like being happy with who you are and knowing the truth of the world."

"Then I'm already enlightened!" Sho announced. "I'm happy with who I am, and I know that, when you're dead, you're dead."

We left the spiritually-stimulating Zenko-Ji Temple for some muscle-stimulating yaki zakana grilled fish, then biked 70km (43 miles) from Nagano to Matsumoto. Yesterday's ride had been a challenging steady climb, but today's was straight up a mountain. We rode for 6 1/2 hours in total, including a 2-hour climb into the clouds, up 10% grades with no relief from the steep pitch. Rain came and went as we passed through cloud lines, chugging steadily up, up, up. An expansive view of verdant, glistening forests and mountains opened up to our left, while the sheer mountain side hemmed us in to the right on the narrow mountain road. With 70+ pounds of gear and both of our weight, the pull of gravity seemed to intensify. We crawled along at a ridiculously slow pace, struggling to keep the bikes from falling over or weaving off the road and over the short guard rail, into the yawning abyss. Few cars joined us on the route up to Sarugababa Pass, so we often rode up the center line.

My legs burned, and sweat mixed with rain water dripped off the tip of my helmet constantly. We rested every 15 minutes or so, as I shook out my hands, which became numb from the tight grip I had to maintain on the handlebars. As I leaned over my handlebars catching my breath, Sho took the chance to come up with impromptu silly dances. "Aren't your legs tired?" I asked, out of breath.

Re-starting on a 10% grade hill was a struggle, as I had to push down several times on the pedal with one foot to get enough momentum to jump on the bike with my other foot. Sometimes I lost balance and had to quickly unclip my bike shoes from the pedals and slam my foot back down on the road to keep from toppling over.

Birds hidden in the surrounding forest canopy trilled sweet songs that echoed through the mountain side. The sound of rushing water from a nearby stream wafted over us, as we appreciated a forested vista that opened up dramatically, the higher we climbed. The mountain chain continued for as far as I could see, and our own mountain loomed overhead, like a playground bully straddling his victim. And we struggled and struggled.

At first, I was intimidated by today's extreme physical challenge, fearing the mountain and waiting for my legs to seize up. But as we continued up the monster climb, I realized that we could do this. The Japan Alps were brutal to ride through on such heavily-laden bikes, no doubt, but we could definitely do it. The key was to ride at a steady rate, take rest breaks, eat and drink regularly, and keep a positive attitude.

I came up with a mantra that calmed my mind as we crawled around switchbacks with no end in sight: "Today, I am Climbing." There was no need to complain as the slope pitched up. My identity was taken over by the act of climbing. I should expect only to ride ever higher, straining against gravity. Strangely, this simple thought made a big difference. Rather than complain about the exhausting effort or wonder when it would end, I simply became lost in the effort. The burning in my legs and back and forearms, the numbness in my hands, the ache in the bottom of my feet as I pressed down relentlessly hard on the slowly rotating pedals, became an unquestioned part of who I was. Climbing became a state of being, which was calming.

Sho helped tremendously, especially when my breathing became labored and he could tell I needed help. I could feel it when he pushed at his limit, and it made a big difference. When his legs gave out, and he had to stop pedaling and just be pulled along, the full load slammed my quads. Although I was exhausted and breathing hard, 5 weeks of cycling many hours a day provided a good enough base to keep going hour after hour up the mountain.

When we finally reached the mountain top at Sarugababa Pass, Sho and I gave each other high fives and rested a bit. I had to wait a few minutes for the loud thumping of my heartbeat to stop drowning out the peaceful mountain sounds that enveloped us.

The descent was nearly as challenging as the climb. We navigated sharp, steep switchbacks threatening certain death if we slipped off the narrow road's edge. My shoulders ached, forearms burned, and my hands went numb once more from the tight squeeze I had to maintain on the brakes. I wanted to steal more than brief glances at the beautiful view, but needed to keep my focus on making a safe descent.

Once we were off the nearly deserted mountain road, we rode along a busy Route 19 into Matsumoto. Exhilerated from the climb, we hammered the final hour of gently rolling hills to Matsumoto Train Station, pulling in at 6:45pm.

A smiling Takeo Sugishita was waiting for us there. I had met Mr. and Mrs. Sugishita and their son on a flight from NYC to Miami last year. We stayed in touch, and they invited us to spend the night in their home. Sugishita-san and I unloaded the panniers and threw the bikes in the back of his truck.

Their home was a beautiful dwelling in the traditional Japanese style, with bamboo sprouting in a well-maintained yard. They laid out futons for us in their tatami mat guest room, and we spent the evening enjoying a delicious meal prepared by their 34-year old son Yuki: cold somen noodles, sauteed eggplant, miso soup, salad, rice, etc. The Sugishita's were wonderful hosts, and I felt the stress of today's strenuous ride dropping away. Sho enjoyed playing with Yuki, who was a natural with kids.

At 10pm, Sho and I took a bath and retired to our futons. I read "The Elephant's Child," by Rudyard Kipling, to Sho, and he laughed hard when I held my nose as I read the line where the crocodile has clamped down on the elephant child's trunk. My older brother Stuart memorized this story when I was a teenager, and as I read it, images rushed back of him reciting the story in the family room of our childhood home in Nashville. I felt the movement of time -- the teenager I was then, listening impatiently to my brother recite the story over and over, would not have guessed that the next time I would read "The Elephant's Child" would be to my 8 year old son in Matsumoto, Japan almost 30 years later...
Posted by Charles and Sho at 8:08 PM