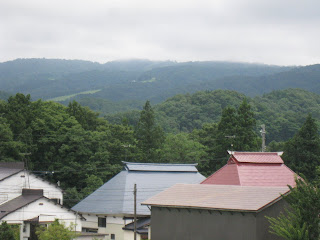 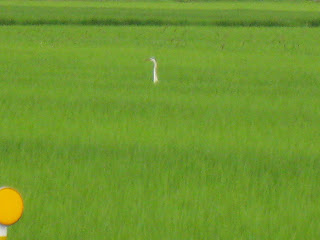 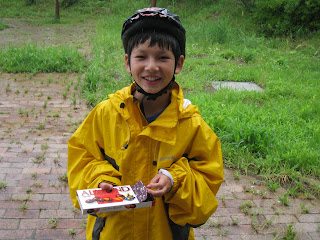 Rode 60km (37 miles) from Kashiwazaki to Arai (aka Myoko). For the past few days, I had been anxious about leaving the coast and heading into the intimidating mountains of the Japan Alps. About 70% of Japan is covered by mountains, and some of the highest are concentrated in central Honshu. In his 1941 Climber's Book, Walter Weston, an English missionary, dubbed this area the Japan Alps, and the name stuck. There was no going around them if Sho and I wanted to see Shirakawa Go, the third World Heritage Site on our itinerary.

We dilly dallied in Kashiwazaki, hanging out in a game room, where I wrote in my journal, interrupted occasionally by Sho coming over to recount his exploits fighting monster bugs and dinosaurs. After fueling up on sushi and onigiri, we rode out of town along the ocean. I tried to appreciate the beautiful coastline, knowing that we would leave it soon. At Kakizaki, we turned inland, and Sho blew the ocean a kiss. "See you on the other side of Japan!"

Creggy, snow-capped mountains loomed in the distance, and I wondered if we would be able to manage the many mountain climbs ahead. Had I been alone on my light, carbon fiber racing bike, I would have been confident in my ability to complete the task ahead. But 75 pounds of gear and an 8-year old changed the equation. Sho and I had managed to ride almost every day for over a month, including some serious climbs, but we had never tackled anything approximating the series of mountains we would have to climb over the next week. I wondered if our legs and spirits could handle it, but kept my anxieties to myself, telling Sho to "get ready for some awesome mountain climbing!"

Happily, today's route from the coast to Arai followed a pancake flat road through rice paddies and farms nestled in a broad valley at the base of the mountain range. It rained in the morning, then turned cloudy in the afternoon, around 75 degrees, making the riding a genuine pleasure. We rode around 5 hours total, pausing from time to time to capture a few pictures along the way.

By the time we reached Arai, the flat valley was beginning to morph into the base of a mountain chain, and I knew that our easy riding was over. We found an onsen public bath and settled down in Arai for a good night's rest before tomorrow's mountain adventure. Before falling alseep, I read Rudyard Kipling's "How the Whale Got His Throat" to Sho. I wondered if we were about to create a new Just So Story: "How the Cyclists Learned to Fear and Respect the Mountain."
Posted by Charles and Sho at 9:30 AM