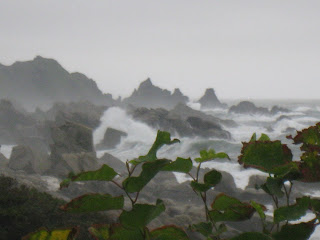 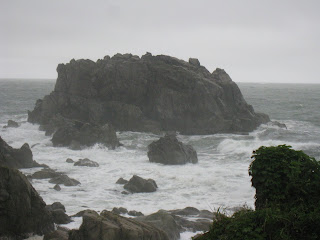 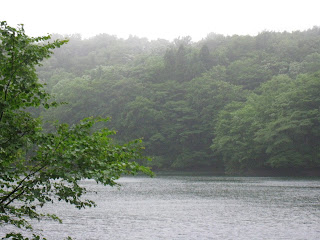 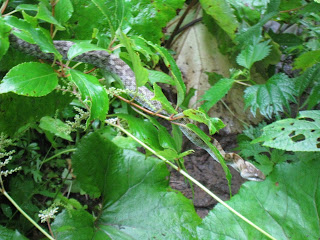 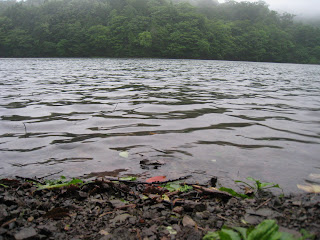 Sunday, July 19, 2009
I was groggy after the fitful night in the storm, but happy to see that only a mild drizzle remained from the evening's violent storm.  Sho and I nibbled on the pitiful rations remaining in our snack bag (a soy bar, crackers and an apple), then set off to explore a tiny slice of the Shirakami Sanchi forest.  We hiked toward Kanayama Ko Lake, slogging along a narrow trail, jumping over and slinking around mud puddles, and pushing through dripping overgrowth that hung heavily over the path.  We spotted a striking bird the size of a sparrow with an exaggerated red beak, which I managed to capture on video briefly.  Later, we were told that few people have the honor of glimpsing this reclusive bird, known in Japanese as akashoubin.
The forest seemed to breathe around us, its powerful presence looming and oddly mystical.  It whispered secrets of a long-forgotten past and hinted at unseen dangers for the careless wanderer.  Light danced through the heavy canopy high above, playing on the drops of rain that covered the lush greenery.
Sho and I encountered no other hikers during our 2-hour sojourn to Kanayama Ko Lake.  The calm water sparkled beneath a morning mist that streamed off of the lush forest surrounding the lake, and we sat quietly by the water's edge, listening to the soft lapping water and enjoying the glorious view.  Reflected images of passing clouds overhead rippled on the gentle undulations, and I felt the unnerving insouciance of nature's beauty.  A scene that was there before I was, and will be there after I'm gone.
Sho shook me out of my reverie, saying that he was hungry, and we began to make our way back to our optimistically-named campsite "Refresh Village."  As I was leading the way, warily pushing through the dripping plant cover that leaned over the trail, I spotted, at the last second, a potentially serious danger.
"Sho, don't move!" I warned.
A brown-spotted snake about 3 feet long was draped on a branch across our path.  It eyed us carefully, not moving, a slight crook in its neck, presumably to allow a quick strike, if needed.  There was no getting around the snake on the narrow path, and I took its picture, then retreated to find a long stick.
"There you go," I cooed, as I used the stick to gently lift the snake out of our way, and dropped him in the grass a few feet off the trail.  Sho stayed close as I prodded the hanging bushes ahead the rest of the way back to the campsite.  A few days later, when I showed the snake's picture to a friend, he raised his eyebrows and observed, "That's an extremely poisonous snake.  A bite would not have killed you, but it would have been a serious problem."
After loading our damp belongings onto our bikes, we left the campsite and rode down steep, wet, narrow roads through the impressive forest for 1/2 an hour, stopping often to let cars and busses pass us safely.  My hands and forearms ached from gripping the breaks, and several times I had to stop to shake them out.  We swung by the Shirakami Ecology Center, where we were the only visitors.  Sho excitedly pointed out an exhibit testing your knowledge of various animal poop, and laughed when I kept guessing wrong.  "Daddy, you really thought that was bear poop?  It's so obvious that it's fox poop."
The friendly staffer gave us the day's first screening of a short film depicting the nature preserve in each season.  It's a breathtakingly beautiful forest, deserving of its status as a World Heritage Site, and I wished we had more time to explore it.  But I felt the pressure of completing this ride in 2 months, and we pressed on.
We returned to the coast and rode all afternoon past crashing waves and steep cliffs before reaching the town of Noshiro.  Tired of being wet, we sought out a minshuku hotel with an onsen bath.  We cleaned up, did laundry and fell asleep wrapped under luxurious comforters.
Posted by Charles and Sho at 9:09 AM