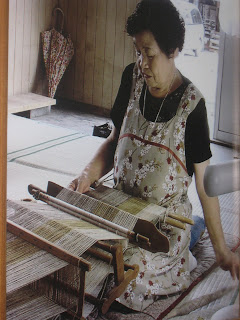 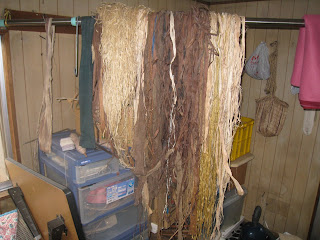 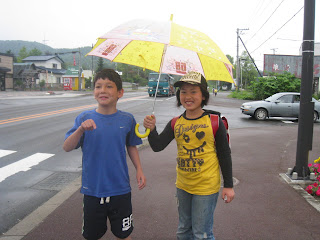 Sho was up early and playing on the beach in Samani, as I broke down the tent and re-packed our gear. A young couple that had driven up for a brief rest by the sea brought me a cup of coffee as I wiped down the bikes, and the campsite manager stopped by with 6 hard boiled eggs and some bottles of frozen water. Sho and I hit the road at 10am, full of optimism from the sunny weather and friendly support from strangers. Besides a 1 1/2 hour lunch and a few snack breaks, we rode for 7 hours today, pushing the pace as much as our 70 lbs of gear and my steadily tiring legs would allow. My legs have been sore most mornings, and the bottom of my feet often ache near the end of a day's ride, but soaking in a piping hot onsen usually takes away all of the aches. Sho hasn't complained of a single bike-related ache, besides not liking wet weather. Ah, youth...

We met a young man from Taiwan named Lin Ting-Chao, who was on Day 36 of a 39-day solo bike ride around Hokkaido. We rode together for an hour, taking turns drafting off of one another and holding a respectable pace of around 20 MPH - not bad for 2 heavily loaded bikes.

After saying goodbye to Ting-Chao, Sho and I explored a side steet in a small town, looking for a bike shop, and bumped into an 8-year old boy walking back from school.

"Are you a foreigner?" he asked me excitedly.

"Yes. My son and I are biking across Japan."

"Really?! Maybe you passed by my house. It's up up street, turn right, and on your left."

At 6:30pm, Sho and I rolled exhausted into Nibutani, a comfortable village with a large population of Ainu, Hokkaido's indigenous inhabitants. Many place names in Hokkaido are derived from the Ainu language (like Sapporo, which means "dry, large river"), and Ainu traditions and religion are deeply connected to the region's magnificent natural beauty. Although it was a 20km (12.4 mile) detour to get to Nibutani, I didn't want to miss this chance to learn about Ainu culture.

As we paused at the only stop light in town, a bright-eyed woman named Maki Sekine ran up to us, asking about our bikes. She brought us across the street to her restaurant, and we spent the rest of the evening eating and drinking at some outside tables with around 20 of her extended family members and friends. We ate deer meet miso soup, an Ainu variation of pork on rice and sweet dango. In addition to running the Ainu cuisine restaurant, Maki works in the local museum, while her husband, Kenji, harvests trees. He and his 7-year old daughter, Maya, took a 3-day bike trip near Cape Erimo last year, and he peppered me with detailed questions about our ride across Japan. Kenji, a soft spoken man with an athletic build, sipped on tea while everyone else around us got drunk, and I enjoyed his company while Sho and Maya were off discovering various insects.

Sho and I had planned to sleep in our tent at a nearby campsite, but Maki invited us to stay in her guest house. It was a kind gesture that saved us from getting soaked in the rain storm that moved in over night. The guest house was Maki's mother's work studio, and Kenji explained how she used a sleek Ainu wooden device to weave strips of Elm tree bark into rolls of material used to make kimonos by a store in Kyoto. Strips of bark hung next to Sho and my bed, along with a picture of the matriarch at work.

Sho and I slept well, and Maya stopped by the next morning on her way to 4th grade class. She and Sho played his Nintendo DS together before a friend poked her head in the door to walk together to school. I took her picture with Sho, as we said goodbye to our new friend.