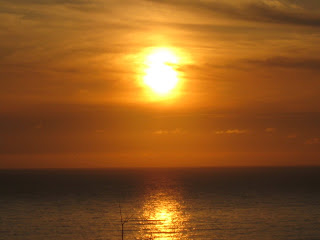 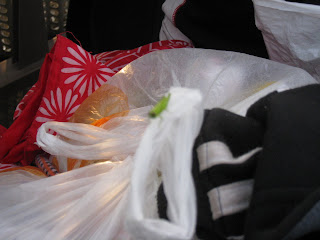 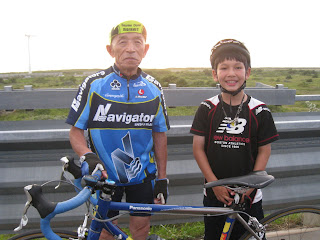 Monday, July 20, 2009 - Rode 100km (62 miles) from Noshiro to Iwaki
As Sho and I ate breakfast in the common room, several of the minshuku hotel staff gathered around our table, stunned that a foreigner and his 8-year old son were eating natto (fermented soybeans).  I usually don't care for natto, but the hotel's stuff was high quality, and we were both enjoying it.  Sho and I ate a packet of the pungent, sticky beans, mixing them with rice and wrapping them with dried seaweed.  We like Japanese food and have happily eaten almost nothing but on this trip, which is a source of amazement to some of the people we've met.  An older woman who served meals in the hotel gave Sho a large packet of furikake rice flavoring as a parting gift, which Sho has used on several occasions since.
After checking out of the minshuku, we rolled our bikes across the street to Noshiro's large public sports center.  Sho excitedly told me all of the sports he planned to do.  "First I'll swim, then play baseball, then golf, and basketball at the end.  And you have to do all of them with me, Daddy."
But when we approached the check-in desk, we learned that the center had been rented out for a private event.  "They're using the entire place?" Sho complained incredulously.
As we returned to our bikes parked outside, a man who had been smoking by the entrance came over to say hello.  When we explained our trip, he laughed.  "I assumed you were an English teacher in town.  Man, was I completely wrong."  He asked us to wait as he ran inside, and returned with a reporter for the main Newspaper for Akita Prefecture.  Sho and I spent the next hour being interviewed by the thorough reporter, who even asked Eiko's age.  He called me two days later for an update, and sounded the slightest bit disappointed that we had already pedaled into the neighboring prefecture.
After our interview, we spent the next 7 hours making our way along the picturesque coast.  At one point, a grasshopper jumped onto one of the rear panniers while we were stopped by the road.  Sho immediately became attached to the friendly little guy, who crawled onto our fingers, then back onto the pannier.  For the next 20 minutes, our new friend clung to the rear pannier as we rode, antennae flapping happily in the wind, staring up at us with a mellow expression peculiar to grasshoppers.  Sho made plans for his new pet, describing where he would sleep ("in a special box I'll make just for him") and asking if the airline would allow a pet grasshopper to fly back to NYC.
And then, just like that, he was gone.  I had stopped the bikes to take a picture, and he took the opportunity to explore the grass next to the road.  Sho was heartbroken and blamed me for the loss.  "If you hadn't stopped, Grasshopper wouldn't be gone," he complained, genuinely heartbroken.  Sho was pissed off at me for the next hour, sulking in silence as we rode.  I started to make plans to get Sho a pet, preferably something a little more reliable than a grasshopper.  Our one cat back at home in New York obviously is not meeting his need to nurture...
Near the end of the afternoon, we stopped briefly to chat with an old man standing beside his racing bike in cycling shorts and jersey and watching the sun set over the ocean.  "I'm 82, but still ride all the time!" he exclaimed.  Very cool.  I took his picture and said I wanted to be like him when I grow up.
Our goal was a specific michi no eki rest stop that had a camp site by the beach, and we pushed the pace hard in the final hour to make it there before it became too dark to ride safely.  At 7pm, we pulled up exhausted, celebrating the fact that it had an onsen hot spring bath, restaurant and campsite all in one complex.  However, when we learned that the campsite charged $45 just to set up a tent, I asked the rest stop manager if we could sleep in our tent for free on the premises.  He didn't mind, and we found a secluded corner of sidewalk behind the main building that offered a commanding ocean view, next to a steep staircase leading down to the beach.
Sho and I set up our tent while observing a group of 10 teenagers shoot off fireworks on the wide beach below.  They had driven an SUV onto the sand and kept its lights on to see better.  Sho and I enjoyed the free fireworks display and their fun raucous behavior.
A long pier stretched out from the michi no eki into the darkness over the black sea, and we decided to take a walk on it.  Along the way, Sho discovered many exciting beetles.  The long, dark pier became too spooky for Sho once we passed beyond the beach and had only murky, churning water beneath us.  "It's ok, Daddy.  I've seen enough.  We can go back to the tent now."  And we turned back, re-visiting the insect friends we'd made on the way out.
Posted by Charles and Sho at 9:11 AM