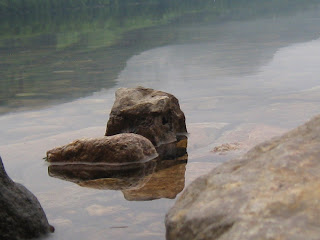 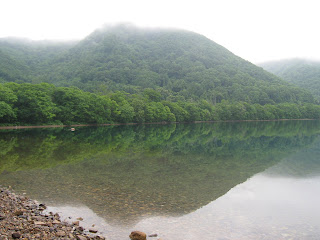 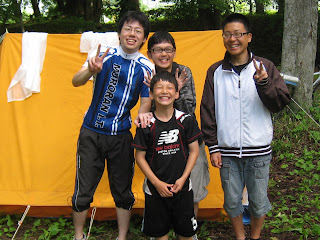 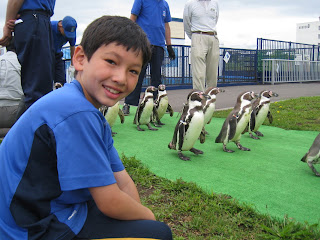 Saturday, July 11, 2009
I was awake at 4:45am, light streaming into our comfortable shack in Muroran, and spent the next 2 1/2 hours writing in my journal and loading gear onto our bikes. Once Sho was up, we took advantage of the practice golf course next door and got in 18 holes in 45 minutes, using practice clubs and billiards-size golf balls.
After catching up with Eiko on our cell phone, it was time to cross the street to the small amusement park beckoning us with a modest, immobile ferris wheel asking to be ridden. We were joined by perhaps 25 other people in the park, and went on most of the rides by ourselves. In addition to jump starting the ferris wheel, we rode go carts, a tea cup spinny ride (which Sho loved, but made me nautious) and watched a group of diminutive penguins put on a parade through the park, including a series of stunts on an obstacle course that had Sho enthralled.
The rain started soon after we were biking from Muroran to Lake Toya Ko, and we donned our rain pants, jackets and booties, determined to go on, despite the crap weather. The quickest route would have been over the massive bridge that had bathed us with its light overnight, but it was meant for vehicles only, and I was not about to risk a ride on that beast. We looped around the peninsula, adding maybe 15 miles to the journey. During a stop for snacks at a convenience store, we met 3 members of the Muroran Institute of Technology's cycling club. They were headed to a campsite on the banks of Lake Toya Ko, so we decided to ride together. Naoki Kanou, Nikaido Kengou and Ogura Kodai were excellent riding companions, guiding us along a less-trafficked route that I had planned and waiting patiently at the top of several long climbs.
We had no trouble keeping up with them on the flat sections, but as soon as we started up an incline, the combined weight of Sho and our 70+ pounds of gear was too much for me to stay with them. Several times, I "red-lined" (reached a point when my heart rate max'd out and my burning legs simply could not hold the pace), which is not a good idea on a 5+ hour ride, because it increases the chance of bonking (when your legs simply can't go on) and makes you sore for the next day's ride.
Thankfully, the college students recognized the situation and took pity on us, promising to wait at the top of each hill until we caught up. That freed me to maintain a more sustainable pace on the long climbs. On several of those inclines, Sho's effort made a big difference. I have noticed his strength increasing as this trip has progressed.
Every so often, the rain seemed to taper off, and the sun poked through a break in the thick cloud cover. We rejoiced at the end of the inclement weather several times, only to be greeted a few minutes later with another torrent mocking our premature celebration. At 5pm, we pulled up to the crowded Nakatoya Campsite, dripping and worn out. I had to ask for a towel before signing in at the camp office, for fear of ruining the guest book. After setting up our tents, we took a luxurious soak in a nearby onsen, then Sho excitedly shot off fireworks with our 3 new friends, who patiently let him steal half of their stash. We had hoped to watch the nightly fireworks display on the opposite side of Lake Toya Ko from the campsite, but the clouds obscured all but the sounds of distant explosions.
Sho and I fell asleep to the sound of a creek emptying into Lake Toya Ko and families splashing around the lake's edge, hunting for fish and interesting insects.
Posted by Charles and Sho at 10:17 AM