Day 32: Fireworks over the Ocean 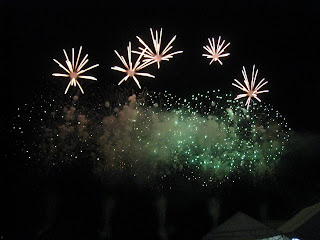 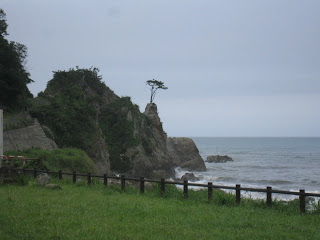 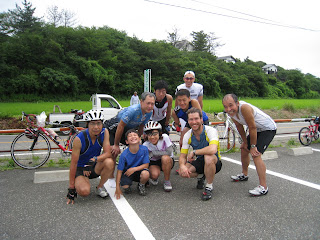 The daily biking and yesterday's beach play must have worn us out, because we both slept for almost 11 hours. We broke down the tent and were on the road toward Kashiwazaki at 8:30am, rolling up and down hills on the coastal highway, passing broad sandy beaches dotted with frolicking families and occasional groups of wetsuit-clad surfers.

Suddenly, I heard, "Charles-san!" from behind, as a group of cyclists overtook us. It was Seida-san and Yanigasawa-san, the Ironman triathletes we'd shared dinner with 2 nights earlier in Niigata. They were in a group of 8 cyclists out for a 100-mile training ride on light, carbon fiber racing bikes. They bounded past us, easily zipping up a long climb that Sho and I had been plodding our way up, slowed to a crawl by our heavily-loaded bikes. There was no way to match their pace, but we agreed to meet for a mid-morning snack at a park not far ahead.

The group was eating on the grass by the road, their bikes leaning on the guard rail, waiting patiently as Sho and I pulled up to join them. We answered questions about our trip and showed off the connected bike set-up to the appreciative group. Sho beamed as the super fit athletes praised his stamina and shook their heads at the thought of an 8-year old riding the length of Japan. I was still trying to decide on the best route to Shirakawa Go, the next World Heritage Site on our itinerary, which was nestled in the heart of the Japan Alps mountain range. Although I didn't say it out loud, I wasn't sure if Sho and I would be able to push our heavy bikes over the many steep mountains ahead. I imagined failing on the first climb we attempted after leaving the coast, and having to figure out what to do then. Walk across the mountain range??

Yanigasawa-san suggested a route that started with a long, flat ride through farm country, getting us closer to our destination, before the inevitable mountain climbs would begin. He also told us about a road closure not far ahead, due to an earthquake 2 years earlier that sent part of the road crumbling into the ocean. The detour was relatively straight forward - an inland run for about 10 miles before returning to the coast. But knowing what to expect was a relief. After everyone had finished snacking, we took pictures and said goodbye to our ultra athlete friends, who sped off to continue their hard training. It was comforting to know that we had a group of experienced cyclists looking after us!

Sho and I arrived in Kashiwazaki at 3pm, just as the rain started to dump on us, and we headed straight for an onsen. The popular spot was packed with people waiting to bathe, and we took a number in the lobby nd waited our turn. Once inside the baths, we took a soak in the outdoor rotemburo, letting the heavy rain pound our heads as we relaxed in the steaming hot bath. After cleaning off, it was a shame to put our wet bike clothes on and roll back out into the driving rain to find a place to stay for the night. We got a single room in an inexpensive business hotel with a coin laundry for our wet belongings.

After eating a sushi dinner near the hotel, we joined a throng of people filing down Kashiwazaki's broad main street toward the beach. The rain had finally let up, but we carried umbrellas just in case. Tonight was the last night of a 3-day fireworks extravaganza over the ocean, and we enjoyed 2 hours of incredible displays in the sky: sparkling waterfalls, racoon-shaped explosions, mini-Saturns, etc. Every 15 minutes or so was sponsored by a local business, whose name was announced over loud speakers to the thousands of onlookers.

"What a great way to celebrate summer!" I said smiling, as Sho and I walked hand-in-hand through the energized town back to our hotel.
Posted by Charles and Sho at 9:28 AM