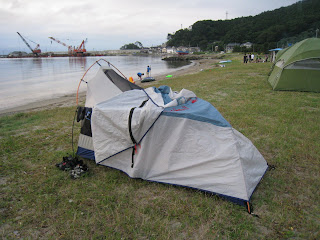 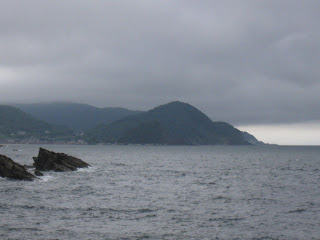 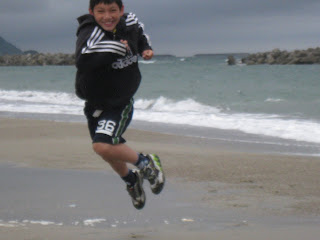 Wednesday, July 22, 2009 - rode 70km from Sakata to Nezugaseki
After spending a few hours updating our blog, eating breakfast and loading gear onto our bikes, Sho and I left Sakata at 10:30am. We spent the next 6 hours riding along the beautiful, rocky coast, marveling at some stunning views that rivaled some of the best we'd enountered in Hokkaido.
We spent an hour playing on a random beach beside a small ramen noodle restaurant, where we ate lunch. Sho frolicked in the sand, challenging the waves to a footrace. I had to drag him away from the fun in order to get in some much needed mileage. Knowing that his taste for beach fun wasn't sated, I found a beachside campsite in a small fishing village called Nezugaseki. A group of around 20 teenager boys on a school trip had set up several large tents nearby, and Sho excitedly watched them set off fireworks against the dark night. Alas, they didn't invite him to join the fun.
At 9pm, Sho and I were interviewed inside our tent via cell phone by TV Japan. "Are you making lots of friends?" the asked Sho, having kept up with the many friendly encounters documented in our blog.
Annoyed at the teenagers who hadn't invited him to play with them, Sho answered, "Not really." He mentioned that he enjoyed the beaches and game rooms, "but the game rooms have been hard to find."
We fell asleep in our tent to the sounds of the ocean waves and teenager war games.
Posted by Charles and Sho at 9:17 AM