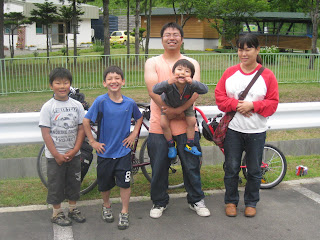 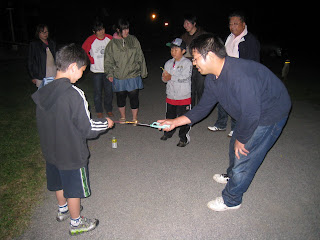 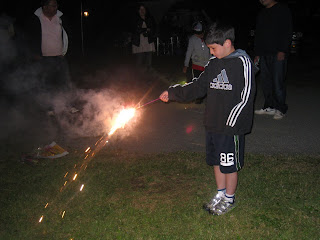 Saturday, July 4, 2009
Happy 4th of July! We celebrated "in the middle of nowhere" according to Sho, who
enjoyed playing with Oomori-san and his 2 boys so much that we hung out around the campsite
until 11am. While Sho explored a nearby stream with his new friends, I broke down the tent and
fixed a flat tire (the 2nd so far on my back wheel). I also grappled with a potentially serious
mechanical problem. Shortly after arriving in Urahoro last night, I accidentally rammed the front
left pannier into a post, bending back the rack so that it leaned precariously close to the spokes of
my front wheel. I rigged a strap to hold it in place, but it was far from a permanent solution. My
fear was that the bent screw would snap under the weight of the loaded pannier, swinging into the
front spokes, perhaps after hitting a bump in the road as we zoomed down a steep hill. In that event,
I would certainly be thrown from the bike with Sho falling to the side for a nasty slide on the concrete.
I asked around town, but there was no local bike shop, so I made sure that the strap was secure
and vowed to repair it at the next bike shop I could find.
Sho didn't want to say goodbye to his new friends, but he finally bade them a reluctant farewell,
and we biked 80km (50 miles) to the seaside town of Hiroo. This took us to the eastern coast of
Hokkaido along a route that I hadn't planned to take. But after Eiko gave me a report of long dark
tunnels, steep mountain climbs and dangerous descents from her drive to Chitose Airport, I decided
to make for the coast. I didn't feel ready yet to tackle a mountain (we will later in the ride), so I
chose a much longer, but less traumatic option. This was not so much a retreat as it was a high-
pitched yelp, followed by a full-on gallop in the other direction with my tail between my legs.
Sho asked, "Daddy, are we giving up?"
"No son," I replied with an earnest look of fatherly wisdom. "We are running the other way
in fear."
We rode along Hwy 336 for much of today, a lightly trafficked road that rolled through
gorgeous countryside culminating in a return to the beautiful Hokkaido coast. There were no
stores and few vending machines along the way, but we had plenty of provisions with us. We
arrived in Hiroo around 5:30pm, picked up dinner (soba, fried chicken, mikan oranges, sushi rolls)
at a Seico Mart convenience store, and asked the teller where to find a public bath and a game
center for Sho. He pointed us to a department store nearby that had a game corner. I ate at a
table, while Sho came and went, playing and grazing the food.
We took a relaxing soak in a public bath house nearby, and at 8:30pm, rode through the
darkness to a camp site 15 minutes back the way we'd come. We rolled along on a wide sidewalk,
our lights flashing in front and behind for the 3 cars that passed us along the way. After
we explained our plans to bike the length of Japan, a friendly young camp site assistant let us
set up our tent for free (a savings of 1,200 yen or $12), warning us to leave by 9am before his
manager showed up the next morning.
We fell asleep snuggling in our tent to the sounds of powerful crashing waves.
Posted by Charles and Sho at 11:09 PM