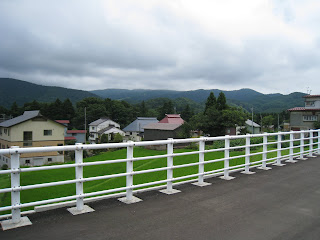 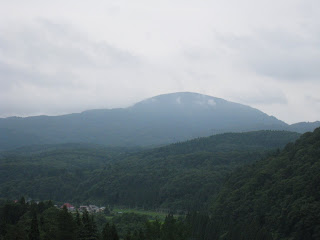 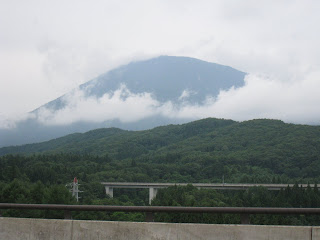 Rode 70km (43 miles) from Arai to Nagano. The day started off sunny and in the mid-80's: pleasant for a relaxed stroll, but a bit hot for a full day of cycling uphill. We covered the 70km from Arai to Nagano in about 5 1/2 hours, most of which was a steady climb. Our combined weight and heavy panniers kept us chugging along at a slow pace, but we were able to ride steadily. We had to rest frequently, because of the heat and humidity, drinking often to ward off dehydration. Sho and I dubbed the infrequent flat sections "gifts" from the mountain. Whenever the steady climb flattened out slightly, Sho yelled out, "Thank you, Mr. Mountain!"

We ate cold zaru soba noodles at a rest stop and took a break from riding for while by throwing a hacky sack we'd brought along. Sho came up with a series of games for us to play, borrowing terminology from baseball, but taking massive liberties with the rules.

The final 15km (9 miles) of today's ride into Nagano was a steep downhill on Highway 18, and my fingers went numb as I held onto the brakes tightly. I couldn't decide which was more uncomfortable: lugging our heavy load up a long, steep climb for several hours, or trying to maintain a grip on the brakes on a steep mountain descent, as my forearms burned and my fingers went numb. Every 10 minutes or so, I had to stop in the middle of the downhill to shake out my arms until feeling returned to my finger tips.

As we rode along a busy route into the outskirts of Nagano's urban sprawl, Sho spotted a large game room with a batting cage. We spent an hour there, Sho playing games, while I tried to figure out where we would sleep for the night. It had started to rain, so I decided to stay in a hotel I found nearby. We washed our grimy, soaked clothes in the hotel's coin laundry and enjoyed an excellent sushi dinner.

I read Rudyard Kipling's "How the Camel Got His Hump" to Sho before we both drifted off, relieved that the first day in the mountains had been manageable.
Posted by Charles and Sho at 9:33 AM