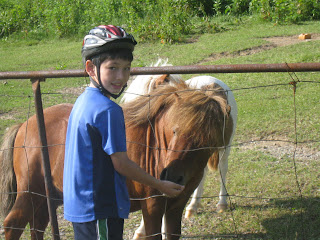 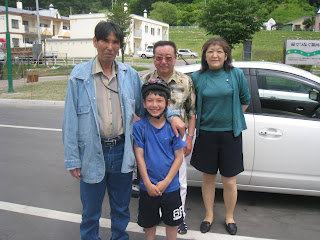 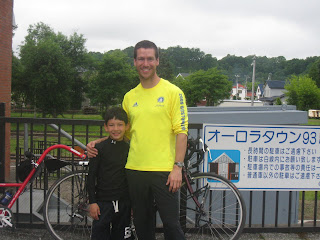 Friday, July 3, 2009
At 7am, Sho and I ate a b-fast in the hotel in Rikubetsu, a nourishing meal of grilled fish,
miso soup, rice, assorted veggies, etc. We met Okuda-san, a manager in Nissan's Hokkaido
Proving Ground Vehicle Test Department. His wife and children live in Tokyo, while he spends
half of the year testing cars for all-weather driving in Hokkaido's demanding environment. There
is a term in Japanese, "tanshinfuunin", for a business person who lives apart from their family, and
he nodded as I expressed my sympathy for this sacrifice. Okuda-san was taken by our adventure,
especially Sho's courage, and took pictures of us as we loaded the bikes and set off.
We rode 105km (65 miles) today from Rikubetsu to Urahoro. The latter half of the ride was
on Route 56, a fairly flat, picturesque country road that took us past sprawling farms and a variety
of domesticated animals, each of whom received a customized greeting from Sho.
The chain on Sho's trailer cycle (which Sho dubbed "Lightening Tiki") fell off several times
early in the afternoon until I was able to diagnose the problem and fix it by adjusting the rear
derailleur. "No more trouble, please now, Lightening Tiki," and he respected my wish, for the
rest of the day at least.
We ate lunch at a rest stop in a comfortable small town called Honbetsu, where we encountered
more friendly and supportive strangers. A man walking by in the parking lot asked about our bikes,
and when we explained our adventure, dug out 3,000 yen ($30) in change from his pocket and
gave it to a surprised and grateful Sho (who went on to burn it all on video games over the next
2 days :-)). A few minutes later, after asking the rest stop manager for directions and explaining
our attempt to bike the length of Japan, he gave Sho a bag full of candy. Sho called this "our best
stop ever!"
We pedaled into the quiet town of Urahoro around 5:15pm and, after some inquiries, found a
pleasant campsite that cost 1,500 yen ($15 - overpriced IMHO). After setting up the tent, we biked
to a public bath for a much-appreciated soak in a deep tub of steaming water. We ate octopus
sashimi, edamame and chicken skewers at an intimate, smoke-filled local izakaya, sharing the
counter seating with a young man (maybe 25?) who had lost his job in March. The paper mill
where he worked burned down, and the owner had insurance for the building, but not the
machines, "or so he said. I've been looking for work ever since, but it's hard to find a job in a small
town like this." On his third beer, he offered to buy us more food and drink, but I demurred, not
wanting to waste any of his diminishing funds.
Urahoro was deserted at 8:30pm, as we biked the 10 minutes back to the campside, rolling
down silent, eerily empty side streets. Sho got spooked and asked me where everyone was.
"Getting ready for bed, which we should be doing too," I answered, pedaling a little faster.
Sho got an unexpected treat when we returned to the campsite. We met Oomori-san, a young
father with a gentle smile, who was hunting beetles with his 7 year old son, Kazuki. We immediately
hit it off, and he invited Sho to shoot off fireworks with his son. Oomori-san loves the outdoors
(his blog is all about fishing) and was introducing his wife and boys, ages 7 and 3, to camping.
Their large, comfortable tent was set up next to a minivan, and they had a nice charcoal fire
going. Our simple, 4lb, 2-person tent nearby looked pitiful in comparison to their elaborate
spread. Sho had asked me earlier on today's ride if he could shoot off fireworks to celebrate the
4th of July, and I had promised him that we would, not knowing how to follow through on the
promise. Enter kind Oomori-san and his kids!
This experience is what hikers call "trail magic." When you need something, be patient and
the journey may just provide you with a solution.
Posted by Charles and Sho at 10:16 PM