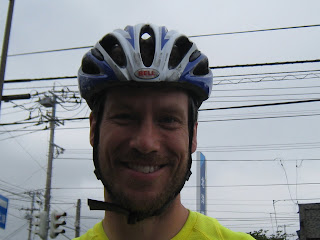 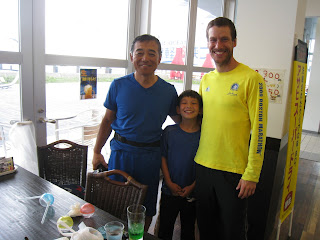 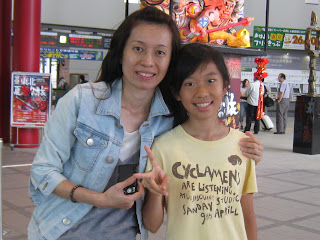 Wednesday, July 15, 2009
Waking up around 6:30am, Sho and I relished the luxury of having a hotel room instead of a tent, and the prospect of a day off from biking.  We ate toast and jam across the street in the train station and bumped into Wu Chia Li and her 12-tear old daughter Yu Ching.  They were going to take a train to Onuma Quasi-National Park.  It was another rainy day, and they wore thin white plastic ponchos, optimistically determined to enjoy the outdoors, despite the wetness.
We took a few pictures with them in the train station, then said goodbye to our friends from Taiwan.  Sho and I explored the Asa-ichi morning market, marveling at the multitude of sea creatures on display, waiting to be eaten.  Sho appreciated the dexterity and speed of squid darting back and forth in a large tank, and he made up an impromptu squid dance that had me laughing out loud.
We spent the rest of the morning back in our hotel room, Sho playing his Nintendo DS and watching kids' TV programs, while I took care of logistical items, reserving a ferry to Aomori the next day, calling our ultra marathoner friend, Sato-san, about visiting him in Niigata, and uploading pictures to our trip blog.  I also called our cycling buddy, Saito-san, to check on his progress.  He was a couple hours away in Mori, riding to Hakodate to take a 5pm ferry to Honshu.  We agreed to see him off at the ferry terminal.
After a delicious lunch of donburi rice bowl with raw sea urchin, salmon roe, and crab at a small local restaurant, Sho and I took a bus to the ferry terminal, where we spent a couple of hours catching up with Saito-san, sharing pictures and stories.  He was in high spirits, having completed his circuit around Hokkaido, and looked fit and tan (at least from mid-bicep to wrist and mid-quadracep to ankle - the "biker's tan").  Our routes were diverging until Shikoku, and we made plans to reconnect there, if our schedules overlapped again.
One of Sho's chief complaints about Hokkaido was the lack of game rooms.  To appease his strong desire to address this issue, we said goodbye to Saito-san and spent the next 2 1/2 hours at "Pabot's Hakodate" hanging out in their game room and getting in three rounds of bowling.
We were both asleep in our hotel room by 8:30pm, and my legs twitched with relief from having the day off from riding.
BTW, I haven't shaved since starting this ride on June 25 and now have a light beard and mustache.  I think that I look like Marcus Aurelius, but Sho says I look like a "scraggly weirdo."  I've attached a pic, so that you can decide for yourself.
Posted by Charles and Sho at 11:15 PM