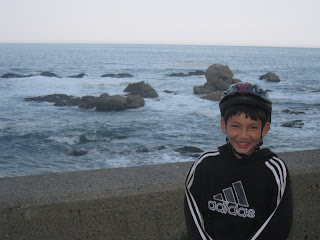 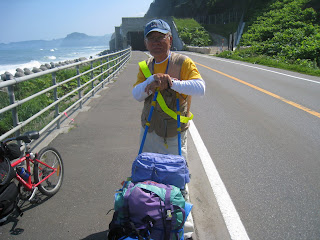 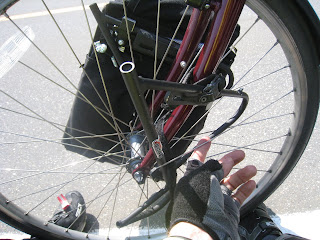 I knew the bent front left pannier (bike bag) rack was on borrowed time and, sure enough, today was the day of reckoning. The morning started off pleasantly, the sun burning off an early morning mist and promising an excellent day for riding. Sho played on the expansive, rocky beach, wind-blown surf slamming dramatically against massive pylons designed to prevent erosion, walls of ocean spray careening skyward and engulfing a group of hardy fishermen perched on an overlook. I broke down the tent, loaded the bikes with our 70+ pounds of gear, and joined Sho on the rocks, both of us mesmerized by the powerful waves.

Our destination today was Cape Erimo, one of the most isolated spots on the east coast of Hokkaido. Just before the campsite manager was to arrive at 9am, we pedaled 15 minutes into downtown Hiroo, looking for a bike shop. The best we could find, after asking around, was a general store that sold "Mama Chari's," cheap bicycles with front baskets designed for running errands around town. There were no specialized screws for low rider front racks to be found here. The sales person told us that the only bike shop in town went out of business "a while ago." We made our way to the game room corner of the local department store, eating b-fast at a nearby table and charging our electronics in a store wall socket. I updated our blog on the Willcom D4 mobile Internet device, while Sho spent $10 to win 50 cents worth of candy, having a fantastic time doing it.

I did my best to strap down the front left pannier to make up for the broken top screw, but the remaining screw at the bottom of the front fork looked precariously over-stressed. I couldn't devise any better solution, so we continued our journey, asking the Road God for benevolence. We rode south out of Hiroo on Hwy 336 and immediately came upon a stunning coastal scene, sheer cliffs to our right spewing out a small waterfall and a beautiful expanse of churning sea to our left. I was so overwhelmed by the natural beauty that I pulled over to appreciate the scene. In doing so, I accidentally rammed the vulnerable front left pannier into the curb, bending the remaining screw and jamming the pannier into my front wheel. I heard the disconcerting sound of a spoke snapping as the bikes came to an immediate stop, sending me crashing to the ground. Since we were almost fully stopped when the accident happened, Sho was able to spring off of his tilting bike unharmed. I quickly righted the bikes, and Sho and I gave each other a knowing look of relief and started laughing.

"Well, that's one way to come to a stop," I commented, as Sho, suspecting a long bike repair session, asked if he could play on the rocky beach. "Knock yourself out," I offered as I surveyed the damage: one broken spoke, another bent, and a front left pannier rack that was no longer usable. Everything else appeared to be ok.

As I began the repairs, spreading out gear and tools on the sidewalk, an occasional car zooming by, the insouciant waves pounding away incessantly, and a steady breeze complementing the warm, sunny day, a smiling older man named Yagi-san wandered up. He was wearing walking shoes and pushing a small trolley loaded with gear toward Hiroo. Pausing to take in my situation, he offered up, "I'm hiking around the entire coast of Japan. Started 7 years ago, 7 days after retiring. I've been walking along a different coast for 2 months every year since then."

Yagi-san couldn't help me repair the bike, but we shared an enjoyable conversation by the sea. He lives in Mie Prefecture, home of one of Japan's most famous and sacred Shinto shrines. He asked if I would visit it, but I said the closest Sho and I would get was Mt. Koya-san, a World Heritage Site visited by the famous haiku poet Matsuo Basho a couple hundred years ago.

Yagi-san furrowed his brow and observed, "Foreigners all seem to love Koya-san. It's curious." Then he continued on his way, and I got back to work.

Happily, I had extra spokes, and the front pannier, made by Arkel, doubles as a backpack. I sent a silent thank you to Joe Kurmaskie for suggesting them. An hour later, Sho and I were once again rolling down the beautiful coast, front wheel slightly unbalanced by carrying only one fully loaded pannier, while the other sat heavily on my back, mercilessly digging into my shoulders...

We spent the rest of the afternoon coming up with ever more impressive superlatives to describe the beautiful waterfront. The traffic was light, the coastal road flat, and the frequent tsunami warning signs unnerving. We rode through many well-lit tunnels, the longest of which was over 3km (around 2 miles). Many of them were open to the sea on one side, allowing spray from the crashing waves to rise up in greeting as we passed. A few tunnels were long, burrowing enclosures with huge fans hanging from the towering ceiling, sucking out exhaust. Cars and trucks were rare, but you could hear one approach well in advance, a low growl emanating out of the darkness far ahead, advancing steadily, ever louder, until reaching a roaring crescendo that drowned out all other sounds as the vehicle passed. Made me feel like I was standing behind a Boeing 777 at take off.

As we paused in front of a house by the road to take a picture of a tsunami evacuation sign, we met Shimpei Sato, who was playing outside with his 5 year old daughter. I asked if Sho could use his bathroom, and we spent the next 20 minutes meeting his family, accepting several cans of juice, and brainstorming ways to fix the front rack. Sato-san had ridden a motorcycle from Sapporo to Cape Sata (the southern point of mainland Japan, Sho and my destination) when he was in college, and he loved the idea of our adventure. Although he didn't have the type of screw we needed, he dug out some extra bike reflectors and called ahead to find a bike shop in the next major town (2 days ride away). We all took pics and appreciated one another's company.

The sun would start to fade soon, and I vowed to stop dilly dallying, making good time in the final 2 hours to Cape Erimo. As we neared the cape, we caught up with Toshihiro Moriya, a cyclist in his early 20's who was biking the circumference of Japan.  Starting in March from his home in Yamagata, central Japan, he was paying for the ride through part-time work along the way. He had just finished a 5-week stint milking cows on a farm that ended, unfortunately, with him in the hospital for a day with a bacterial infection he suspects he caught from the cows.

"I couldn't eat or drink anything until yesterday, and I still feel weak," he commented, and I noticed that he had been weaving on his heavily laden bike a bit more than normal. We parted company at the entrance to Cape Erimo's camp ground, where Sho and I planned to spend the night and enjoy the public bath there. Moriya-san continued on his own a few more miles to the tip of the cape, where he planned to save the $3 camping fee and sleep in a bus terminal.

After a wonderful bath, Sho and I set up the only tent on the lonely, wind swept camp grounds and shot off fireworks for the 3rd night in a row. We ate through most of our remaining provisions, before settling down for a session of journal writing and reading Speed Math for Kids. Sho and I can now multiply 2-digit numbers (like 98 x 94) in the blink of an eye!
Posted by Charles and Sho at 9:13 PM