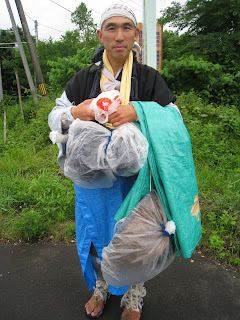 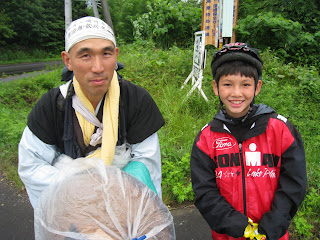 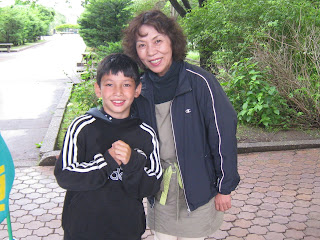 I slept fitfully, waking up at 6:30 with a deep fatigue in my legs. Trying to hang with the 3 college cyclists two days ago and yesterday's long, steep climb into the clouds had taken their toll. Rain poured down outside, wind gusts slamming sheets of water against the window of our tatami mat room. I crawled under the soft warmth of the comforter, snuggling next to Sho on our futons for a few minutes more before having to face the day.

We ate a well-rounded breakfast prepared by the minshuku staff. Sitting on mats at a long, low table in a large tatami-mat common room, a lone TV perched on a raised dais like a diety at the front of the room, we munched on grilled fish, rice, miso soup, pickles and fruit. Checkout time was 10am, and we gloomily said farewell to the comfortable minshuku Japanese inn and pushed our bikes into the dreary wetness.

The rain and wind put on an impressive display, and 10 minutes into the ride, I paused to capture the storm on video. We were biking on a coastal road, powerful wind gusts spewing spray off of crashing waves surging just to our left. Sho added video commentary as a row of flags behind him flapped violently and threatened to rip off of their posts. We rode through the mess for 5 hours before my weary legs had enough. As we entered Mori, a verdant, park-filled town whose name means "forest", we rejoiced at the sight of a michi no eki rest stop. Parking our bikes in front of the bathrooms, underneath an overhang that protected them from the downpour, we tracked dripping brown water into a noodle shop and feasted on mounds of soba noodles in steaming hot broth.

We met a friendly woman selling produce at a stall who immediately took a motherly liking to Sho. When we explained our ride, she expressed amazement that an 8 year old could accomplish such a feat, and bundled up 5 tomatoes, a bag of cherries and a 500 yen coin ($5) for us. She also pointed us to the nearest onsen bath house and campgrounds.

Sho and I hung out at the michi no eki for an hour, goofing around and encouraging the rain to let up. Miraculously, it did, and we set off on the 10km (6 mile) ride to the camp grounds. My legs had tightened up during our rest stop, and my quadraceps screamed up at me as we set off. We rolled up and down hills, looking for the turnoff for the onsen and appreciating the lack of rain. As we rounded a bend on a climb up a steady, meandering hill through Mori's lush, forested landscape, we spied a lone figure plodding toward us on foot. A large conical hat concealed his face, and his flowing robes draped down over worn sandles. As our path's converged, I stopped to say hello.

Taking off his hat to reveal a gentle face with intense eyes, he asked polite questions about our bike set-up, saying he'd never seen such a thing. We told him about our plans and asked him where he was headed. "Cape Souya, where you started," he answered, only telling us half the truth. After talking further, we learned that he was 39 years old, a wandering Buddhist monk who carried no money and depended on handouts for survival. Thinking about how much energy it takes to walk each day (and how much Sho and I have been consuming), I speculated that he must be hungry constantly. He carried a thin blue plastic sheet, on which he slept wherever he happened to find himself each night, and not much else. Upon further questioning, he explained that he was walking around Japan along the coast. It took about 1 year to complete a circumnavigation, and he was on his 6th circuit!

I immediately thought, "Why in the world would a person spend 6 years hiking in circles?" Which reminded me of some similar questions Sho and I received when telling people about our plans to bike across Japan. My answer, usually unspoken, was, "If you have to ask why, I can't explain it to you."

The wanderer let me take his picture, but would not reveal his name. "It's better if I don't say."

I commented that his 6-year journey must be full of amazing experiences. He smiled at my enthusiasm, offering, "Walking continuously or not walking, traveling or not traveling, experiences are wonderful in their own way."

As he spoke, I couldn't help but judge him, thinking that walking endlessly in circles was foolish somehow. He had taken the concept of an adventure too far, left too much behind, drifted too far away from "normal" society for me. I thought back to guys I had met in Bangkok when I was traveling around Asia just out of college. They hung out on the street, smoking pot, doing nothing and living on a few dollars a day. They had dropped out. One guy told me that he had figured out how to live on less than $1,000 a year.

And yet, this wandering monk was not lost. By wearing this garb and walking around Japan, he grounded himself in an organizing principle of a religion that gave intellectual structure to his peripatetic search. Was it a search? Was he looking for something? Was I? Or did his comment about the wonder in all experiences mean something else? A quote from Hermann Hesse's Siddhartha came to mind: "What could I say to you that would be of value, except perhaps that you seek too much, that as a result of your seeking, you cannot find."

I offered him some of our food, which he accepted graciously after only a prefunctorily mild protest, took his picture, and Sho and I set off. As we rode, I thought, "Life is like a gift, which you can celebrate or throw away. The choice is yours." This ride, shared with my 8-year old son, full of challenges and new discoveries, felt like a good way to treasure the gift...

As we continued to ride, we heard shouts of encouragement coming from behind us, and saw our friend from the produce stand driving by. She waved out the window, smiling and shouting, "Gambare, gambare!" (Go, go!)

World Ranch was a few miles off the main road, a sprawling country playland designed for the whole family. In addition to its onsen hot baths and modest campground next to the horses' stables, it boasted two 18-hole practice golf courses (with the billiard size golf balls), an archery site, badminton nets, a large wooden maze, a collection of farm animals (including a curious "small dog" cage with one Maltese and one Chihuahua), and best of all, speakers hung throughout the farm doling out old time country songs from the Deep South. My favorite was a song whose title was probably, "Hillbilly Blues," followed a close second by a schmaltzy, twanging country ode to the merits of prayin' for the Good Lord to save my wretched soul.

There was something both endearing and jarring about this particular soundtrack echoing through Hokkaido's countryside. After some reflection, I concluded that it was in keeping with the music Sho and I often heard when we walked into a department store in Japan, Jason Mraz's "Geek in the Pink" floating over the finely crafted, traditional Japanese crafts.

Although the rain had stopped, a seemingly endless line of dark, billowing clouds rushed by overhead, propelled by powerful gusts that sent us chasing after various items, as Sho and I tried to set up our tent. To keep from losing it to the wind, I had to bundle up the tent into a clump that I could hold on to while securing one section at a time to the ground with stakes. Sho stood guard over our bikes, holding on to our gear and shouting excited exclamations, as the wind tried to rip open the panniers. We finally managed to set up the tent, secure our belongings and retreat inside.

As I read Japanese fairy tales to Sho, the tent rattled and bowed and swayed around us,like the hull of a boat tossed about at sea in a storm. We fell asleep fairly quickly, despite the racket, exhausted from the day's challenging ride. I woke up to pee around midnight and emerged from the tent to a brilliantly clear night sky, the constellations glowing against the black void, and the clouds and wind gusts long gone. I paused to appreciate the peaceful still before snuggling up in my sleeping bag next to a softly snoring Sho.
Posted by Charles and Sho at 8:18 PM