Day 18: Biking into the Clouds 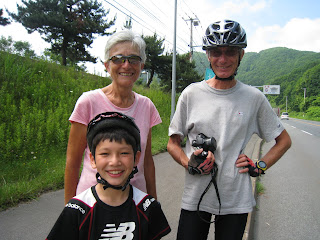 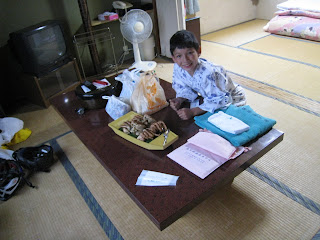 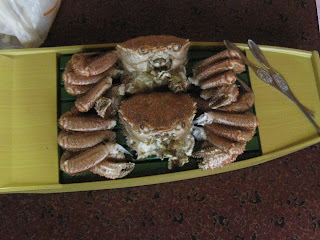 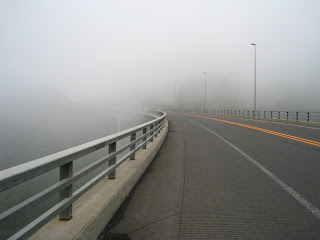 Sunday, July 12, 2009
I awoke at 5:30am and took a few pictures of the mist settling over Lake Toya Ko. After breakfast in the tent with Sho and loading the bikes, I noticed that the back tire was flat for the 5th time on this trip, and decided to replace the tube instead of patching it. Sho played rambunctiously with our college buddies, and they patiently let him jump on their backs and show them various insects he discovered. As the 3 cyclists were returning to Muroran, we parted ways, and Sho and I rode south for around 80km (50 miles) to Oshamanbe, a comfortable coastal town.
A few hours into the ride, we bumped into Alain and Ursula Besson from Luzerne, Switzerland. We had been in touch via e-mail over the past 2 months and were hoping to see one another at some point. After Alain retired from Nestle, the two started biking around the world from Switzerland, and have visited India, Tajikistan, etc. over the past 16 months. China is next on their itinerary. They were sweet with Sho, stimulating to talk with, and would have been great traveling companions. We took pictures of one another and set off in different directions, lamenting the fact that we couldn't spend more time together.
Sho and I followed Highway 37, which had hugged the coast. But soon, we found ourselves chugging up long, winding climbs through tunnels and eventually above the cloudline. The day had started sunny and warm, but we donned jackets as we gained elevation and found ourselves surrounded by a cool mist.  Despite the cool temperatures, the sweat poured out of my helmet, as I strained to pedal up the steep road.  We crossed a couple of dramatic bridges cloaked in fog and threatening certain death if one of us fell over the side railing into the obscured abyss. The traffic was intermittant, but annoying, and Sho started to list out the things he does not like about cars: "too loud, they pollute the air, give some people motion sickness (but not me), use up lots of gasoline," etc.
After reaching the highest point of a 2+ hour mountain road climb, our descent was harrowing. Returning to sea level down the mountain side, I gave our brakes a challenging workout and made sure that we stayed in control during the rapid descent, both hands becoming numb from my tight grip. The tips of several fingers remained numb for 2 days afterward.
In Oshmanbe, we found a minshuku Japanese inn with an onsen bath and the only coin laundry in town, and splurged $70 for a room, deciding against another rain-drenched night in the tent. After a satisfying soak in the onsen, where I tried to regain feeling in my fingertips by flexing them open and closed in the steamy water, Sho loaded the laundry machine with practically every piece of clothing we brought along, both of us relishing saying sayonara to the mildew smell.
We had arrived too late to eat dinner in the inn, as is customarily provided for guests with a reservation, but the proprietor brought up 2 delicious crabs to our room, saving us from having to make an outing in the rain for a meal.
We read the patently unfair Japanese folk tale "Urashima Taro" (read it, and you'll see what I mean) before drifting off to sleep in our sumptuously comfortable futons, appreciating the luxury of our accomodations.
Posted by Charles and Sho at 10:42 AM