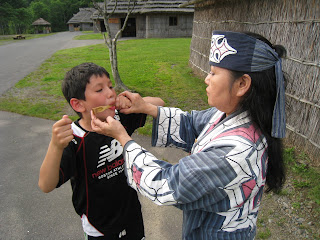 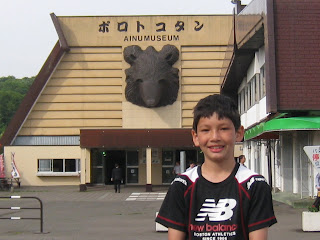 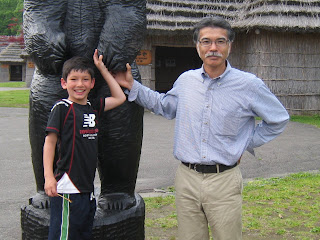 
Sho was up before 5am, unable to sleep because of the bright sun and yapping crows. I joined him for a b-fast of sweet bread and mikan oranges in the tent. While cleaning up in the michi no eki rest stop, we met Betty, an outgoing woman who looked to be in her 60's. She was taken by Sho ("He's such a beautiful combination of American and Japanese.") and by our bike adventure, and we talked for 30 minutes. She is from Kobe, Japan. After the massive earthquake there in 1995, she and her husband started traveling around Japan, and I sensed that she was still traumatized by the devastating event. She explained that she changed her name to Betty after the quake, and I never found out her Japanese name. As Sho and I started to push off on our bikes, Betty ran over with a gift for Eiko, explaining that it must be hard for a mother to be separated from her husband and 8 year old son for 2 months. The gift was a small figurine of a banjo-playing ringo chan, character with a head shaped as a small red apple.

Just in case you were note sure if you should get up, Mukawa, like many towns in Japan, lets you know to get your butt out of bed at 7am with a blaring 30-second melody blasted from loud speakers on a centrally located rooftop.

Sho and I left the town alarm clock behind and rode for a few hours to Tomakomai (including a 30-minute stop to fix a flat tire), by far the largest city we have visited since starting this ride. We navigated through traffic lights and urban traffic to a large shopping complex in front of the train station. I actually had difficulty finding a place to park our bikes, as all of the racks were full. I finally locked the bikes to a street sign and hoped the police would not remove them. Mont Bell, an outdoor gear store I learned about from my brother-in-law in Tokyo, was on the fifth floor of the shopping complex. I bought some pannier rain covers and got directions to a bike store, while Sho eyed fishing rods, hoping to take advantage of the seaside we have been riding along.

"Sure son, as long as you skin it and cook it first."

The route to the bike shop included a busy bridge with no shoulder and cars zooming by. I felt unnerved to be back in a bustling city and longed for Hokkaido`s open countryside. The bike store did not have a front rack, but I took the opportunity to replace a bent spoke and pump up the tires.

The road we took out of Tomakomai had a lot of debris on the shoulder, and I had to patch the day`s second flat on my back wheel (4 so far). We arrived in Shiraoi at 3:45pm, where we visited the Ainu museum Porotokotan and were hosted by Masahiro Nomoto, the museum`s director. A colleague of Maki Sekine, our friend in Nibutani, Nomoto-san was expecting us and kindly took the time to show us around. He had spent time in New York City a decade ago, and told us about Ainu exhibits in the Brooklyn Museum and Museum of Natural History. Sho and I watched an Ainu dance performance and took a lesson in playing the mukkuri, a simple-looking, but difficult to master, flute-like instrument that left us with sore fingers and lips by the time our lesson ended. The museum included an exhibit of Ainu clothing, implements, hunting techniques and history that captured both of our imaginations. Sho explained how he would use the various items on display and was particularly confident that he could kill one of Hokkaido`s brown bears with an Ainu-made long spear. The exhibit included a fascinating map showing the names and locations of "The Minorities of the Northern Regions" stretching from Hokkaido, over the North Pole and down into Canada and the U.S.

After the museum closed at 5:30pm, Sho and I rode on an empty road into the adjacent forest, along a large lake, ending at a campsite tucked away deep in the woods. It was a road out of The Legend of Sleepy Hollow, and we were both relieved to find out that we would not be the only campers. Mutsuo and Taeko Kitakata, a wonderful elderly couple, were spending a few months driving and camping across Japan. As Sho and I set up our tent nearby, they brought over a container of miso soup and some tomatoes, which we gobbled up appreciatively.

At 9:15, I conducted a 25-minute cell phone interview with TV Japan from inside the tent. They wanted to talk with Sho too, but exhausted from our day's adventures, he was already fast asleep!