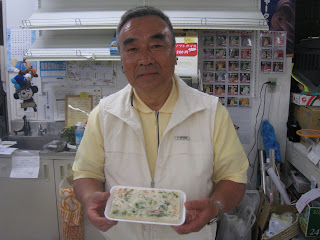 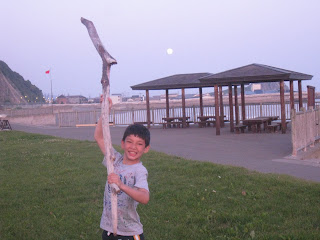 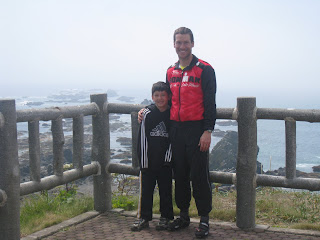 The bright morning sun, which had climbed over the sea scarcely an hour earlier, had me up at 4:45am. I spent a couple of pleasant hours writing in my journal in the tent, while Sho slept soundly beside me. He woke up around 7am, and we finished off the rest of our provisions: dried squid, sweet bread and cheese. Not the most impressive of breakfasts, but enough calories to hold us until we reached Cape Erimo, a 25-minute bike ride away.
We spent the morning hanging out at the cape, a jagged promontory overlooking a series of impressive rocky islands stretching into the sea and dotted with colonies of seagulls and a family of lounging Kuril harbour seals. We had chugged up a steep climb on our bikes to reach the official point of Cape Erimo, and Sho proceeded to lead me back down the other side on foot, following a long staircase cut into the cliff side. His goal was a romp on the rock-strewn beach, but I convinced him to wait for a more hospitable seaside hangout.

Although I don't enjoy a collection of souvenir shops inserted into a place of natural beauty, I was relieved to re-stock our snack bag and to linger over a meal of sea urchin on rice. Sho's favorite part of the visit was a man-made wind tunnel that simulated the power of a raging storm. A large fan roared away at the front of a long, rectangular room with strategically placed support poles. At the back of the room, the wind gusted in our faces at 10 meters per second. As we trudged our way to the front of the room, leaning into the wind, our bodies were buffeted at 25 meters per second. Sho loved it, running with and against the current and crashing into me full of mischievous laughter.
The wind tunnel was cool. Not cool was riding our bikes away from Cape Erimo and experiencing a similar head wind along the rolling oceanside road. At times on the flat sections, I had to drop into my lowest mountain climbing gear just to keep us going at a crawl. The view was lovely, but I found it hard to appreciate as my legs burned and sweat curled down my cheeks while we moved along at 5 MPH. The pannier-turned-backpack weighed heavily on me, biting into my shoulders and making me miserable. After an hour and a half of suffering, I spotted a small Bridgestone car repair center and asked if they had a screw that might fit the front pannier rack. Twenty minutes later, the rack was back on, still curved in toward the wheel, but acceptable. It was a big relief to get that weight off my back, making the rest of the day's ride much more enjoyable.
The real-world wind tunnel finally ended as we exited the peninsula and re-joined Hwy 336, heading west along Hokkaido's southern coast, passing beaches covered with long strips of kombu seaweed tended by teams of harvesters. A friendly older couple we had chatted with briefly at Cape Erimo caught up with us in their minivan and gestured for us to pull over. They handed us some sweets and a drink, we took pictures together, thanked them and waved goodbye. My earlier exhaustion started to give way to optimistic energy from the friendly encounter.
I had planned to sleep in Urakawa, but when we saw the playground and beach in Samani around 10km (6 miles) before our destination, Sho and I were smitten. We set up our tent in the grass next to a pleasant beach and proceeded to beat the crap out of each other with driftwood that magically turned into Samurai swords. The two local restaurants were closed ("because it's Monday," one proprietor explained) but we were able to scrounge up a meal at a nearby grocery store owned by Hitoshi Kudo. When he learned of our plans to bike across Japan, he offered us some delicious homemade octopus kamaboko, "made from octopus caught just over there," he noted, pointing across the road to the sea.

A full moon rose over the peaceful water, as we settled down for bed, and the last I remember, the glowing orange orb had crossed in front of our tent and was draping us with moon beams shimmering off the gentle sea.
Posted by Charles and Sho at 9:35 PM