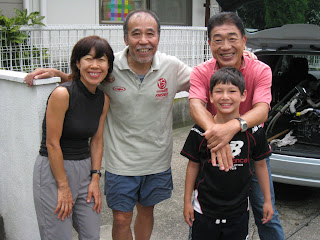 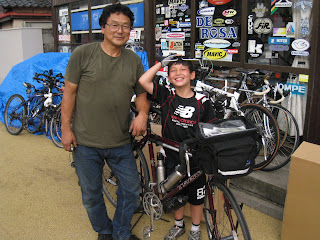 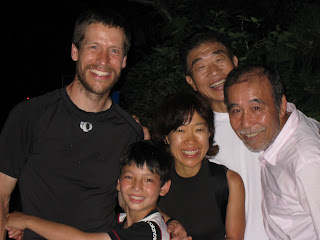 Friday, July 24, 2009
Sato-san, our roommate 3 weeks earlier from Saroma Ko, Hokkaido, met us at 9am in our hotel lobby in Niigata, and we spent the rest of the day together.  He brought along a DS game sent  from Eiko, which Sho promptly tore open and began to play.  Sato-san also gave us a fan and a beautiful pouch hand made by his wife.
I had expected only to spend a short time with him, but Sato-san was extremely generous with his time.  He drove us around his home town Niigata and helped us work through a list of errands, including a visit to an outdoor store to buy Sho a collapsable fishing rod.  I also bought some new bike gloves, because my old ones were starting to disintegrate.  He took us to the beach where he trains for Ironman triathlons, a rocky strip protected by dozens of massive hexagonal concrete blocks placed just off the coast to prevent erosion.
"This used to be a sandy beach, but it was all washed away.  This is also where North Korea abducted several people back in the 1980's."
Sato-san introduced us to Kenichi Suzuki, who owns Attack Bike Store.  He has run the shop for over 30 years, builds his own bikes, and his shop is a favored destination of the local triathlon community.   Exactly the person I wanted to find!  Suzuki-san gave our bikes a much-needed tune-up, including adding some "magic oil" to keep the chains, points and screws all working well, despite being exposed constantly to heavy rain.  He also straightened out the bent eyelet at the bottom of the front fork, something I had been afraid to attempt, for fear of snapping it off.  The front rack was now in good shape and no longer a nagging source of concern.  We took his picture, tried unsuccessfully to pay him for his services, and rode off on fabulously smooth machines ready to tackle another month of riding Japan.
Sato-san had planned to take an overnight ferry up the coast later in the day to ride bikes 250km (150 miles) with his training partners, but canceled his plans in order to eat dinner with us and two of his ultra athlete friends, Chikako Seida and Seiki Yanigasawa.  Seida-san is one of the top female Ironman triathlete's in the area and was training for the Sado Island Ironman in September, where athletes swim 2.4 miles, bike 112 miles and run 26.2 miles.  Yanigasawa-san has been racing for decades and heads up the local Ironman triathlon club.  I shared details about the 5 Ironman triathlons I've done, and we all bonded over our shared hobby.  It was fun to see these amazing athletes, who run 62-mile ultra marathons and compete in Ironmans, shaking their heads in amazement and gushing over Sho's courage and stamina.
The five of us spent the evening enjoying a fabulous spread of sushi and other delicious tidbits at Yanigasawa-san's house.  We ended the day, sitting in the empty suburban street in front of the house, shooting off a big package of fireworks Sho had brought along.
"I haven't shot off fireworks here since my kids were Sho's age, over 20 years ago," Yanigasawa-san commented, smiling as Sho performed a silly dance while holding a sparkler in each hand.
Sho and I fell asleep back in our hotel, feeling pampered and well-treated by our new friends in Niigata.
Posted by Charles and Sho at 9:24 AM