Day 16: The Kindness of Strangers 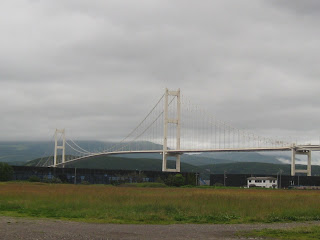 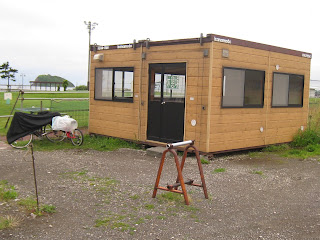 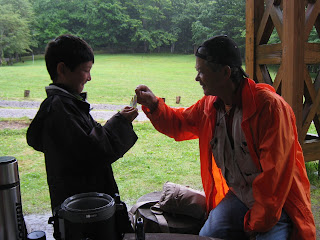 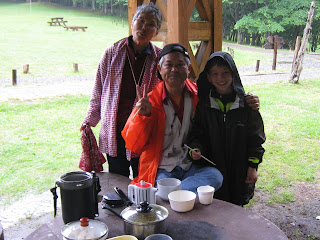 I was awakened at 2am by the sound of heavy rain pounding our tent, and slept fitfully thereafter, until finally getting up at 4:30am. The heavy rain continued until noon, and Sho and I chose to remain huddled inside our tent, eating a b-fast of sesame kombu and pancakes we bought the day before at a convenience store.

We whiled away the time playing games and telling stories until 8:30, when Mutsuo Kitakata (whom we had met in the campsite the night before) knocked on our dripping tent and invited us to share some of their food. Riding many hours a day kicks your metabolism into hyperdrive, and Sho and I were more than willing to partake in a second breakfast. We happily accepted, racing through the falling rain over to a pavilion, where the four of us dined on miso soup, pork strips, rice, sesame paste and super-sour homemade umeboshi. Sho enjoyed the umeboshi so much that Taeko gave him a small bottle full to take with us.

We spent the morning chatting with the amiable couple, and they treated Sho like a grandson, drawing pictures together, making paper airplanes and goofing around. When the rain finally started to let up, and I loaded our bikes to leave, Taeko gave Sho a handful of stamps with fun Japanese characters, and Mutsuo gave him a 500 Yen coin ($5).

We said goodbye once again to new friends and made our way through puddles and intermittant, spitting rain for the next 6 hours from Shiraoi to Muroran. My wife, Eiko, had researched game centers on our route, and we interrupted our ride with a 1-hour side trip to a game room in Noboribetsu. Sho was in his element, racing from game to game and reporting back to me excitedly about his exploits on Pokemon Battorio, Dinosaur King, etc.

The town of Muroran lies at the tip of one of Hokkaido's many capes and boasts a michi no eki rest stop next to a large onsen public bath and across from a modest amusement park with an aquarium. The only problem is that it does not include a hotel or campsite, nestled near the base of a towering bridge (reminded me of the George Washington Bridge in NYC) on a waterfront lined with marinas. Arriving at 7pm and needing a place to sleep, we threw ourselves at the mercy of Kudou-san, the only remaining employee at work there on a Friday night. He took pity on us and let us sleep in an adjacent shack, designed as a changing room for guests of a practice golf course next door. The cozy enclosure met our needs nicely, offering a place out of the wind and rain to lay down our sleeping mats.

After a nice soak in the nearby onsen, we settled down in our comfortable sleeping quarters, reading Japanese fairy tales and drifting off to sleep to the sound of a strong wind gusting off the nearby waterfront and under the glow of the long string of lights lining the massive bridge.