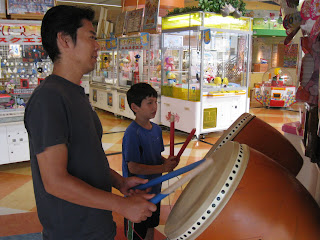 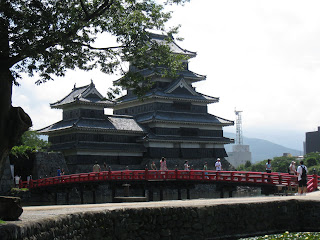 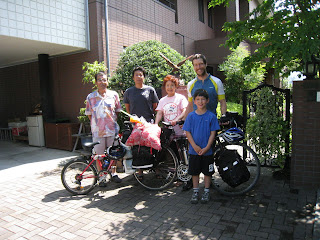 Biked 50km (31 miles) from Matsumoto to Narai. Sho and I shared a traditional Japanese breakfast prepared by Mrs. Sugishita of rice, miso soup, grilled fish, and various roots and vegetables. After saying thank you and taking pictures with the Sugishita's, Sho and I followed Yuki on his bike to nearby Matsumoto Castle. It is an impressive structure towering above the surrounding town, surrounded by a koi-filled moat glistening in the warm sun.

We explored the old castle, peeking out of slits designed for arrows aimed at attacking armies, climbing up ridiculously steep staircases, and past displays of firearms from hundreds of years ago. Sho loved the place, and excitedly ran ahead and back, reporting on the next cool exhibit ahead.

After an hour and a half of castle fun, Yuki led us to a game room, where he and Sho hammered out beats on taiko drums, and played a number of other games. I found a stool in a corner and wrote in my journal, the nonstop cacophonous clanging and beeping of the machines all around testing my concentration.

We finally said goodbye to our friend Yuki, and turned our bikes away from Matsumoto for a mostly flat 3 1/2-hour ride to Narai. In contrast to yesterday's lightly trafficked, dramatic mountain climb, today's route was along Highway 19, a busy road full of passing trucks and lined with miles of chain stores, pachinko parlors, and car dealerships. The unsightly commercial sprawl slowly disappeared as we left the outskirts of Matsumoto and were surrounded once again by rivers and forests, but the heavy traffic never let up.

Narai is a tiny cluster of traditional Japanese homes and businesses, tucked beside a wide, powerful mountain river. Part of the Edo era system of government checkpoints that allowed the Shogun to maintain a crushing grip on Japan's populace for over 250 years, it is now a pleasant tourist destination surrounded by the stunning mountains of the Japan Alps. Its one main street was nearly deserted, as Sho and I arrived around 4:30pm. We wanted to stay in a minshuku Japanese inn, but the first two we visited were closed. Thursday was clearly not a popular day for visitors to this tiny historical village. We eventually secured a room as the only guests in Nagai Minshuku, run by a 77 year old woman, whose husband only showed his face the next day, when he peeked out of a window to watch us ride away.

Since we had arrived late, it wasn't reasonable to expect a prepared meal, as is commonly served at a minshuku. "I can't offer you a proper dinner, but could make you both ramen noodles, if you'd like," Mrs. Nagai offered.

"Oh, don't go to the trouble," I offered. "We'll just pick up dinner at a restaurant in town."

Sho and I spent the next 45 minutes walking up and down the nearly completely deserted main street, passing small shops and a few restaurants, all of which doubled as people's homes, and all of which were closed. Everyone seemed to have retreated into the back of their houses, leaving their businesses facing the street for another day. We wandered around alone in the dark night, our stomachs starting to rumble.

Returning to the minshuku, we amended our over-confident response to her generous offer, and asked her to make us some ramen after all. The steamy broth tasted great, as we kneeled by a low table on tatami mats and talked with Mrs. Nagai. Before going to bed, Sho and I stole out into the darkness, flashlights in hand, to the edge of the river for some night fishing. We didn't catch anything, but did encounter an impressive collection of night bugs, which Sho incorporated into his animated imagination, telling me all about the bugs' experience of the world and current difficulties.

Back at the minshuku, Sho and I bathed in the deep, relaxing communal bath on the first floor, then I rolled out futons in our large 2nd floor tatami-mat room. It was a warm night, but we closed the window, which had been allowing a pleasant draft, to keep out the bugs. A small rotating fan provided enough relief from the oppressive warmth to allow us to fall asleep, listening in vain for any sounds coming from this silent ghost town.
Posted by Charles and Sho at 6:17 PM