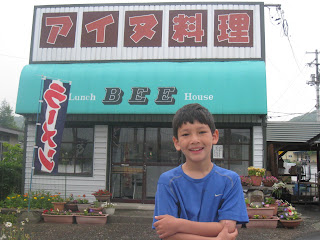 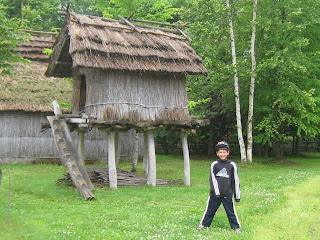 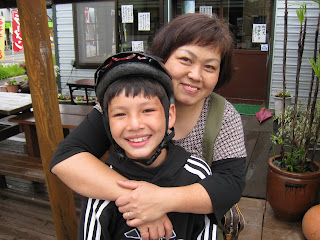 Wednesday, July 8, 2009
The rain came down heavy and uninviting, as we loaded gear on our bikes in front of the Sekine's guest house. Sho didn't want to put on his rain pants ("they don't feel good") or his rain booties to keep his shoes dry ("they make me look stupid"), but I forced him to, not wanting him to get soaked. We rode quickly through the downpour to Biratori Onsen, a 15-minute ride past Nibutani's Ainu Culture Museum, rock carving store, and lush forest that would have been pleasant in nicer weather.
We pushed the bikes into a dry spot at the building's entrance, draped our wet clothing on the handle bars, and spent the next 5 hours inside. We cleaned ourselves , then soaked in the steaming onsen, a nicely designed large pool with streams of water pouring out of towering black boulders. I sat under one such waterfall, letting the jets of hot water pound my neck and shoulders. The onsen was empty at 10am, and Sho splashed and romped around rambunctiously, behavior that would not have been appropriate if others were in the water. But with just the two of us, I didn't mind.
We spent the rest of the morning watching the rain storm pound the saturated ground outside, content to write in our journals, play paper napkin football and eat lunch in the onsen's restaurant. By 1pm, the rain had mostly passed, and we biked back to the Ainu museum. Sho enjoyed the variety of thatched huts, some of which were large enclosures with smoked fish hanging over a fire inside, others small storage sites on stilts reachable by climbing a long leaning log with notches cut into the side.
We stopped by the restaurant to say goodbye to Maki Sekine and her mom before heading back toward the coast. Kenji Sekine happened to drive by us a few minutes later, having cut trees from 6am to 3pm and now on his way to a second job. He pulled over his white mini-truck, a stubby cross between a pick-up and a go cart that is ubiquitous in Japan's countryside, and gave us a friendly farewell.
Sho and I rode on to Mukawa, noticing a significant increase in traffice and people. For the past week, I had to plan our food rations carefully, because of the long stretches of sparsely populated countryside. But now we were entering the beginning of urban life, passing convenience stores every few minutes and dealing with an ever increasing amount of traffice zooming by.
We found a michi no eki that included some rooms for rent, but they were all taken. With permission fom the manager, we set up our tent in the grass beside a large parking lot filled with motorcycles and RV's.
Ending the day as we started it, we enjoyed the luxury of a local onsen, and were snoozing in the tent by 9:15pm.
Posted by Charles and Sho at 4:22 PM