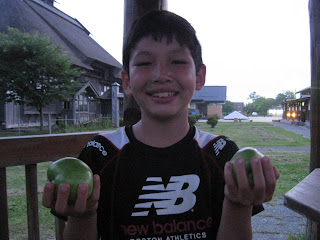 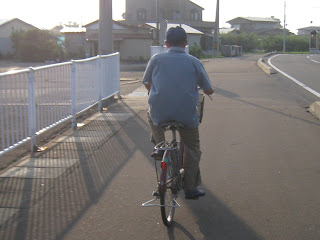 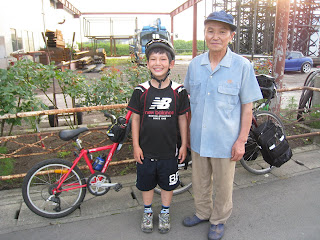 Friday, July 17, 2009
Although I wanted to start riding right away, Sho convinced me to let him play at a game room in Aomori he'd discovered the night before.  We made a quick trip to a local bike shop to pump up the tires and replace a screw on the front rack, then spent an hour and a half battling dinosaurs and throwing various Pokemon into proxy wars.
We rode for 5 1/2 hours in the afternoon, including a detour in Tsugaru City to see Japan's oldest apple tree.  I got lost on the way and pulled up in front of a random house to ask for directions.  An old man was cleaning his tractor and looked up with a friendly smile.
"Do you know where Japan's oldest apple tree is?" I asked.
"Yes, I do," he answered simply.
"Would  you mind telling us how to get there?"
"Sure.  In fact, I'll take you there.  Wait a minute, while I get my bike."
His name was Waichirou Kosaka, born and raised in Tsugaru City.  When I asked where he was born, he pointed across the road and laughed, "Right over there."  He tore out a picture of the apple tree from a calendar he sent his wife to retrieve from the house and handed it to us.  After intoducing us to his wife, oggling our bikes and letting us take his picture, Kosaka-san jumped on his bicycle.  He pedaled at a leisurely pace, greeting neighbors along the way, letting his eyes linger over a small construction site, a man working on his car, and the local graveyard, which he glanced at several times.  I imagined that his parents and some friends were buried there, and that he thought of them every time he passed by.  I could feel the deep connection that he had to this village and imagined the simultaneous benefits and boredom that come from digging deep roots in one place.  It was a challenge for me to maintain control over our heavily-loaded bikes while riding at his pace, and as I struggled not to fall over, I realized that this was a metaphor.  He was grounded and steady, while I was over-loaded and in need of speed.  Hmm...
We soon arrived at the famous apple orchard, walking our bikes up a small path to a comfortable home surrounded by apple trees and bursting with a large family of playful cats.  Mr. Kosaka introduced us to Ms. Kosaka, "my relative who runs the place."  I marveled at the odds that we would stop in front of his house.  Ms. Kosaka politely showed us the oldest tree.  "Three of them actually, all brought over from America 131 years ago."  Then she and Mr. Kosaka swapped gossip about family members, while Sho and I took pictures of the trees from various angles and started a game of catch with some fallen apples.
Ms. Kosaka sent us off with two green apples from the famous tree, suggesting that we wait two days for them to ripen.  "And clean them thoroughly.  I recently sprayed the tree with insecticide."
We returned to our bikes, and Mr. Kosaka led us on an enjoyable, meandering 15-minute ride through his quiet village, plodding along steadily until we reached the main route that Sho and I would take toward Honshu's western coast.  He gave us a polite bow and turned back toward home.
The sun was getting low as Sho and I resumed our journey, and I decided to try to find a place to sleep at the next michi no eki rest stop, about 15km (9 miles) away.  Each of these rest stops is different, and I was hoping for on onsen bath house, restaurant and camp site, but arriving around 5:30pm, we found a nearly deserted parking lot and a small grocery store that was closing up.  A large replica of a traditional Japanese home stood nearby, the doors locked, so that we could only peer in to see the large tatami-mat rooms.  A field connected to the michi no eki stood empty and inviting, and we had our tent up in 15 minutes.
Since there was no place for dinner nearby, we retraced our route a few miles to pick up some food at a Circle K convenience store.  We were told that there was an onsen not far down the road.  It was getting dark, but we were both grimy from the day's ride and gave in to the lure of  soaking in a hot steaming bath.  But after biking back past the rest stop and continuing another 10 minutes in the dark without seeing it, I decided to get off of the road and return to our tent rather than risk a nighttime accident.
It had been a warm day, and we were hot inside our tent, the sweat beading uncomfortably as we tried to settle down.  I took off the rain cover to allow a breeze to cool us off, and we were snoozing happily by 9:30.  At 1am, I awoke with a start and was back outside the tent, frantically replacing the rain cover as the down pour began...
Posted by Charles and Sho at 10:19 AM