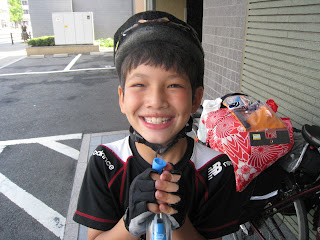 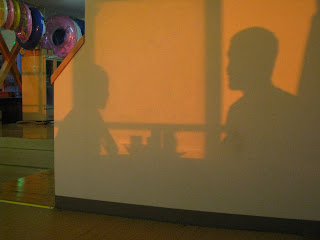 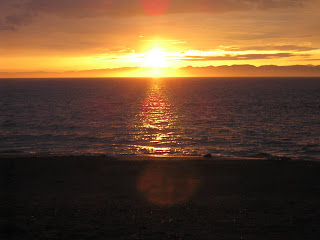 Saturday, July 25, 2009 - Rode 25km (15 miles) from Niigata to random beach.
Sho and I started the day with a satisfying soak in an onsen public bath, then stopped by Attack Bike Shop to get the hyper-competent Suzuki-san's help replacing the brakes on our bikes.  We were leaving the coast and turning east to ride over the Japan Alps in 2 days, and I wanted a fresh pair of brake pads.  Our heavy load and the many steep descents in the mountains would chew them up...
Our planned destination today was Kashiwazaki, a comfortable coastal town 80km (50 miles) south of Niigata, with a popular onsen bath house and a special summer fireworks display planned for the evening.  However, 15 miles into the ride, Sho spotted a sandy strip of beach next to a campsite and restaurants, and pleaded for us to stay there instead.  An afternoon's romp on the beach was too enticing, even if it meant that he would miss the fireworks in Kashiwazaki.  It was a rare sunny day, about 75 degrees, perfect for beach play.  I agreed to his request, and we spent a few hours body surfing, kicking a beach ball, jumping over puddles, and having a wonderful time.
When I had enough, I retreated to a nearby restaurant with a view of the beach, eating oyakodon and writing in my journal while watching Sho through the window.  I had invited him to join me, but wanted to keep playing.  The incredulous look he gave me when I said that I was ready for a break reminded me of a particular incident from my childhood, when my family went to Florida on vacation.  As we first arrived at the beach, and I bounded toward the waves, I called for my father to join me.  I was around Sho's age (8) and as I splashed around excitedly in the rolling waves, my father stood smiling at me from the beach.
"No thanks, son.  I don't want to get wet."
I remember thinking, "You don't want to get wet?!  How can you come to an incredible beach like this and just stare at the water?"
As the song "The Circle of Life" ran through my head, Sho finally joined me, and we enjoyed a beautiful ocean sunset.  I wanted a re-fill of water, but chose not to interrupt our waiter, who was perched by a window, snapping pictures on his cell phone of the dramatic display that was turning the ocean into a shimmering kaleidoscope of orange and red, slowing being swallowed up by an enveloping darkness.
Back in our tent, I read the Japanese fairy tale "Momo Taro" to Sho, and we were snoozing by 8:30pm.
Posted by Charles and Sho at 9:26 AM