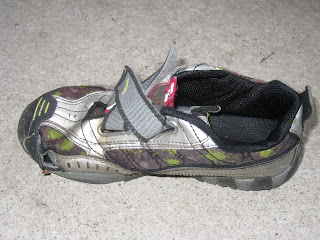 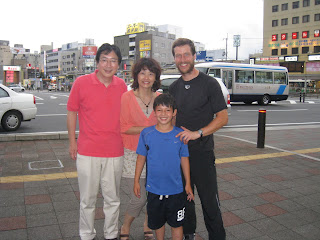 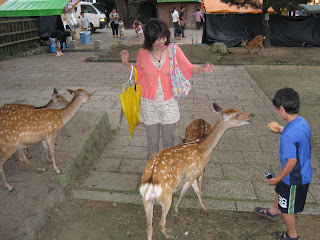 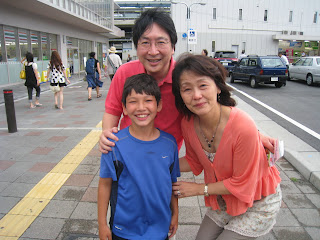 Sunday, August 9, 2009
Today's ride was an easy 45km (28 mile) ride from Kyoto to Nara, so we had some extra time in the morning to visit a few more of Kyoto's impressive sights before leaving.  Sho chose to play pool.  An impressive choice.
We also stopped by a Takashimaya department store to buy him a new pair of shoes.  His old pair was embarrassingly beat up, worn down by a relentlessly active lifestyle and sporting a few holes that let in the rain.  While leaving the store, my brother-in-law, Aki Ikegaya, called.  He lives in Tokyo, but he and his wife, Akemi, were spending the weekend on the Ise Peninsula, a few hours' drive away.  He offered to meet us in Nara later in the afternoon for a brief visit before they had to return in the evening.
We left Kyoto immediately and made our way along a busy road to Nara, arriving at 3:30pm.  There were less trafficked options, but I chose to take the quickest route in order to have as much time with Aki and Akemi as possible.  As we rolled into the JR Nara train station, the two of them jumped out of their car and gave us a hearty welcome and enthusiastic cheer.  It felt so nice to see family.  After checking into a nearby hotel and locking up our bikes, Sho and I hopped into their car and headed to the deer-infested park at Todai-ji Temple.  The deer are revered in the temple and wander around freely, mingling with the tourists.  Visitors can buy packets of pellets to feed them, but you have to be ready once you do.  The minute you buy a packet of food, the deer converge on you, aggressively shoving and nipping.  I was bitten on my waist, leaving a nice bruise, but Sho was too fast for the obnoxious creatures.  He looked like the Pied Piper, running up the long path toward the temple trailed by a line of hungry deer eating the pellets he threw over his shoulder as he ran.
We didn't have enough time to visit the inside of Todai-ji Temple, so Sho and I vowed to return the next day on our own.  Aki and Akemi drove us back to our hotel, where Sho and I gave them a reluctant farewell.  I felt lonely watching them drive off and looked forward to our arrival in Tokyo at the beginning of September, when we would see them again and be reunited with Eiko and Saya.
Sho and I ate udon noodles for dinner, then relaxed in our hotel's onsen bath before falling asleep by 9:30pm.
Posted by Charles and Sho at 10:34 AM