Day 41: Dancing the Night Away 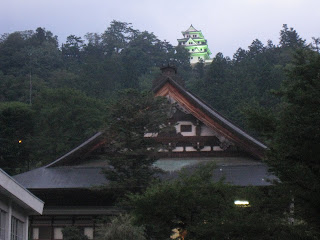 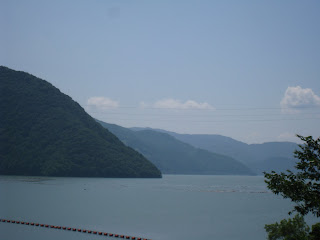 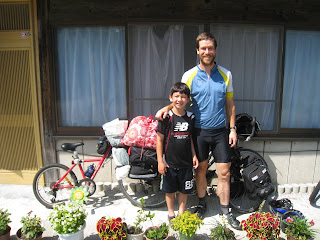 August 4, 2009
Biked 85km (53 miles) from Shirakawa Go to Gujo Hachiman. Sho and I joined in the Bon Odori dancing - fun!
After an excellent breakfast of grilled fish, rice, mountain vegetables, etc. in the ryoukan Japanese inn in Shirakawa, Sho and I set off on Route 156 toward Gujo Hachiman, a small town famous for nightly traditional street dances during the summer.  We were looking forward to joining in the fun, but had to get there first.  We endured a 30-minute steady climb up a meandering hill under the hot glare of the summer sun until we reached the top of a dam system.  The rest of the day's ride was flat to down, a nice treat after a week of mountain climbing.  We rode along Lake Miboro Ko, whose waters shimmered in the bright sun.  Suffering from the 95 degree temps, Sho and I talked longingly of jumping into the cold water.
When the lake was formed by the dam system, four villages with 230 homes were submerged.  Some cherry blossom trees were transplanted from one of the villages to the lake's edge.  Every spring when the blossoms bloom for a week or two, then fall to the ground, it is said that each falling blossom represents a tear for the mourning villagers who lost their homes.
Although we didn't take a dip in the lake, we did stop along the way at a small convenience store in a tiny town, whose owner took an interest in our trip.  We chatted for a while, and she pointed us to the modest post office next door, which doubled as a tourist information center.  The clerks jumped up when I walked in, perhaps surprised to have a tourist instead of a local drop in.  They gave me a map of Gujo Hachiman and told me where tonight's dancing would take place.
Sho and I pulled in to Gujo Hachiman at 3pm, dripping sweat and ready to get away from the pounding sun.  We navigated through the pleasant village, crossing over stone bridges and along narrow alley ways until we found the neighborhood that would host the evening's dancing.  People were already putting up lanterns in preparation.  We interrupted one such group, who told us about a nearby ryoukan Japanese inn that had a room available.  As we entered the lobby, a large Golden Retriever peered at us from behind the front desk, feet perched on a chair and head cocked expectantly in our direction.  Sho offered a friendly bark, and he sauntered off to retrieve a human.  After checking in, we immediately changed into the yukata robes and slippers provided by the inn, and took advantage of the ryoukan's onsen, cleaning off the sweaty grime and soaking briefly in the hot water.  There was a separate tub full of cold water that we slipped into at the end.  Our sweat immediately changed to goose bumps, but we didn't mind.  It felt great to finally cool off.
We spent the rest of the afternoon exploring the town, which boasted an imposing castle standing guard on a hill looming over the pleasant village.  A powerful river passed through, and we ate shouyu osembe crackers and pumpkin ice cream on the way to the water's edge.  Sho tossed stones into the rushing current and talked excitedly about how long a person might be able to survive, if they fell into the river.  "Not long, buddy," I observed.  "And let's not find out."
We found a sushi restaurant, where we stored up energy for a night of dancing!  As daylight faded, the streets took on a festive atmosphere, and streams of people started to converge on our neighborhood.   Most wore festive outfits of colorful yukata robes and geta wooden shoes.  Although the sun was down, the heat and humidity were oppressive, and we all glistened with sweat.  Sho energetically ran back and forth in front of street vendors who sold food and enticed passersby with various games.  Sho enjoyed trying to scoop up plastic fish out of a cylindrical plastic tub of flowing water using a small paper net that immediately started to disintegrate after getting wet.
Then the dancing began.  A large float dominated the main dancing street, and a band perched atop blasted out a rhythmic traditional tune over blaring loud speakers.  The lead singer shouted out the lyrics excitedly and a long line of dancers snaked around the length of the street, steadily making their way around in a circle.  Local organizers helped to keep order, as the procession of dancers progressed from one end of the street to the other.  Everyone was encouraged to dance, and after watching for a few minutes, Sho and I dove into the mix!
There were a series of dances that changed with the music, each one involving a collection of steps and hand movements repeated over and over.  Invariably, just as we finally got a dance down, the music changed and we had to learn a new set of moves.  No one seemed to mind our poor dancing, but some local teenagers took a charitable interest in us.  They patiently counted "one. two, three, one, two, three..." as they showed us the moves, and we butchered them.
The dance finally ended at 10:30pm, and while Sho hung out with our new friends, I joined a group of young men pushing the heavy float into a parking lot at the end of the street to be stored away until next time.
Sho and I returned to our inn, sweaty and exhausted, but excitedly recounting the fun we'd had.  "What an awesome way to celebrate summer!" Sho observed, as we snuggled in bed, ready for a good night's sleep.
Posted by Charles and Sho at 6:38 PM