Day 37: More Than We Bargained For 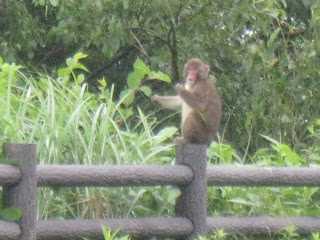 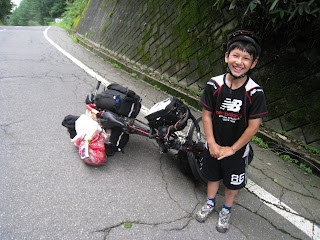 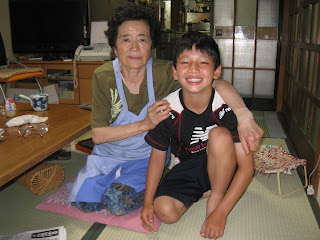 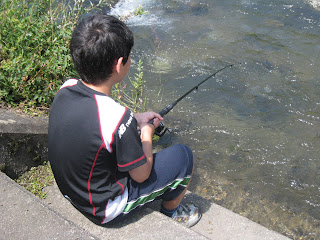 
Rode from Narai over 2 mountains and up a third with 10% climbs throughout, stopping exhausted at random spot in the mountains.

Sho and I started the day off right with a traditional Japanese breakfast in our ryoukan, prepared by Mrs. Nagai. We kneeled on thin pads, eating at a low table in the tatami-mat family room. A large TV was perched in an alcove near the table, providing an unwelcome distraction from the excellent meal. I don't like to watch TV while eating and would have turned it off, except that Sho much preferred the kids' program to my rambling about today's route.

After saying goodbye to Mrs. Nagai, we got in another short fishing session by the powerful mountain river in Narai. We then merged onto Route 19, headed toward Takayama. In Japanese, "Takayama" means "tall mountain." And we learned first hand today why it got that name, climbing over 2 mountains passing and up a third. The first pass was full of switch backs with 10% grade slopes, and took us an hour and a half to get over. The experience was a repeat of our ride over Sarugababa Pass two days ago: burning quads, numb hands, brief rest breaks every 15 minutes to keep from bonking, and breath-taking views. Once again, the mantra "I am Climbing" helped get me up the mountain.

Sho pedaled hard, especially on the steep sections, and only complained a little about the hard work. We made light of the ordeal by playing the "Fortunately/Unfortunately" game.

Me: Fortunately, we have the privilege of riding through an incredibly beautiful part of Japan.

Me: Fortunately, we've ridden up mountains before and know that we can make it to the top.

Sho: Unfortunately, I'm going to stop pedaling for a while, and let you do all the work.

Shortly after making it over and down the other side of the first mountain, we did it all over again, with a 2-hour climb straight up to another pass, with equally steep 10% grade switchbacks. As we neared the summit, we came upon a group of around 10 monkeys perched on the guard rail, all of whom looked up suspiciously as we rounded the corner. We immediately stopped our bikes and slowly took out our cameras. We stayed a safe distance away, capturing pictures and video of the animals, as they chewed on leaves from overhanging trees and kept a wary eye on us. After watching them for fifteen minutes, Sho and I slipped by, slowly pushing our bikes a respectable distance away on the far side of the road.

We had planned to reach Takayama today, but when we encountered the beginning of a third mountain climb at 6pm, I realized that I had made a mistake. I thought we only had two serious climbs today and would cruise downhill into Takayama in the last hour of daylight. Instead, we were struggling up, up, up again. We had eaten most of our food and had little time left before it would be too dark to ride safely.

There was supposed to be a campsite ahead, but we didn't reach it before shadows started to close in around us, as we slowly crawled up the steep, narrow mountain road. I didn't want to risk getting caught halfway up a mountain in the dark, and decided to turn back and return to a small village we had passed through 7 miles back. As I told Sho about this decision, he commented, "Usually, I'm a pain in the butt. But today, you were."

As we arrived in the village, daylight already gone, a friendly proprietor of a local restaurant (closed unfortunately) let us set up our tent on the asphalt by an outdoor bathroom that was populated by some impressive and intimidating insects. The location wasn't ideal, but it was better than sleeping by the road on a mountain side. We munched through our meager snacks, and fell asleep with our stomachs still rumbling from hunger, our bodies worn out from 9 hours of hard riding. But we were safe.

A heavy downpour soaked our tent all night, and by the next morning, water had leaked through the rain cover and was dripping down on us. Thick pools of water had formed on top, and Sho had fun dumping the water off by pushing up on them from inside the tent.

"I guess we got a little more than we bargained for, huh?" I commented. Sho nodded and knocked a few more bucket fulls of water on to the concrete.
Posted by Charles and Sho at 6:19 PM