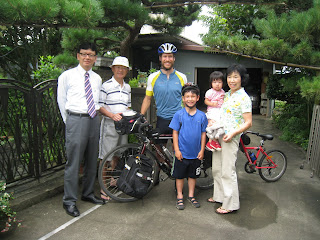 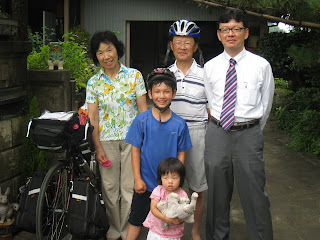 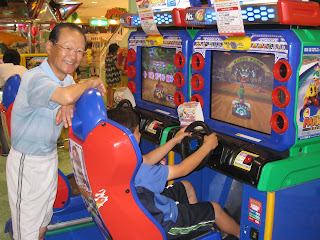 Wednesday, August 5, 2009
Biked 40km (25 miles) from Gujo Hachiman to Seki City. Interviewed by local newspaper reporter. Stayed with Mr. and Mrs. Kameyama, visiting onsen together and eating delicious dinner.
Sho and I enjoyed a traditional Japanese breakfast in the ryoukan inn and took another soak in the onsen before heading out of Gujo Hachiman at 9:30am.  Today's destination was an easy 40km (25 miles) ride to Seki City on Route 156.  The road had more traffic than I was used to, after so much time on deserted mountain roads.  But it was generally a downward slope, as we steadily made our way toward the sea down the eastern spine of the Japan Alps.  We were done with the mountains!  A sense of relief washed over me, as I realized that we were now likely to complete the trip.  I didn't tell Sho before the ride started, but I calculated that we had maybe a 50% chance of making it all the way from one end of Japan to the other in 2 months.  Since we had never attempted anything like this before, I recognized the possibility that the extreme demands might be too much for Sho, or my legs might give out, or we might have a serious mechanical problem with the bikes.  But we had just completed a week of ridiculously hard mountain riding and were still going strong.
"If we can bike over the Japan Alps, we can do the rest!" I told Sho.
"Yeah baby!" he yelled out with pride.
Kengo Kameyama was waiting for us along Route 156 as we entered the outskirts of Seki City.  I met his son, who directs the NYC office of the Japan National Tourism Organization, while preparing for the ride.  Mr. and Mrs. Kameyama offered to host us as we passed through their home town.  Riding a small moped, Mr. Kameyama led us to his home, where we met his wife and incredibly cute grand daughter.  Sho and I played games with the little girl, which reminded us how much we missed our own 2 year old, Saya.
A reporter from the local newspaper spent 2 hours interviewing us about the ride.  She was particularly interested in Sho's perspective, and why a 41 year old would interrupt his career to do such a thing.  Sho said that it was all about sampling Japan's fabulous game rooms, while I tried to explain that this was both an attempt to celebrate life by doing something adventurous and a way to give Sho a deeper understanding of his Japanese heritage.
After we finished the interview, Mr. Kameyama drove us to an excellent onsen, where we washed away our cares in a series of steaming, bubbling, indoor and outdoor tubs.  We luxuriated while enjoying views of the surrounding forests that encircled the outdoor baths.  We melted into massage chairs in the waiting lounge, my sore muscles making me grimace as the chair hammered, squeezed, rolled and crushed me into submission.
Although I could tell that we were supposed to  be back home for dinner, Mr. Kameyama consented to Sho's request to stop by a nearby game room, where we spent 45 minutes in computer-generated fantasy land.  While watching Sho play a game, I suddenly became light-headed and didn't feel well.  One of the consequences of riding a bike many hours day after day is a metabolism that demands constant sustenance.  I hadn't eaten for several hours, distracted by the newspaper interview and onsen visit, and my body was starting to protest.  I zipped over to a Mr. Donut across from the game room and quickly munched down 3 donuts, immediately feeling much better.
Mrs. Kameyama had prepared an impressive meal of sashimi, fried chicken, cooked veggies and sukiyaki.  Sho and I ate and ate and ate, staying up late to relish the delicious food and wonderfully friendly company.
Posted by Charles and Sho at 6:41 PM