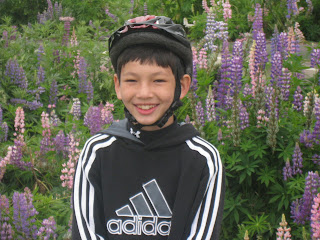 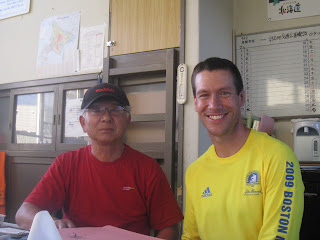 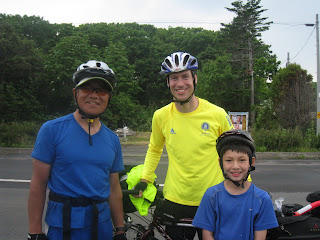 June 28, 2009: After organizing our gear and getting the bikes ready, Sho and I started the day with an 8am picnic breakfast by the road, while watching runners in the Saroma Ko Ultra Marathon pass by. It was cloudy and cool, perfect for long distance running, and we wondered how our new friend, Sato-san, was doing, now 3 hours into the event. We said goodbye to Ishiwata-san (see pic), the friendly proprietor who had rented us the room. He sent us off with a hug and a gift of a volunteer's jacket from the ultra race.
We biked alongside the runners for about 2 hours, shouting encouragement ("ganbare!") as we passed. We even got a few cheers ourselves from onlookers.
Sho and I met Eiko and Saya in a small, comfortable town called Tokoro. After a little searching, we found an excellent sushi restaurant that put us all in a good mood. My legs were full of sushi energy during the afternoon's ride, as we followed a cycling path and enjoyed gorgeous views. I took a picture of Sho in front of a roadside patch of flowers that we both thought his Nona (my mom) would love. The route was almost completely deserted until we came across Saito-san, another adventure cyclist we had met 2 days earlier. 61 years old and retired, but full of infectious vigor, Saito-san started biking on June 9 from Yamagata in central Japan. He is riding solo around the entire coast of Japan, planning to finish by mid-October. We rode together for the rest of the day, and checked into the same hotel (Yasuragi B&B) in Abashiri.
Eiko and Saya met us there, and Eiko took Sho to a game room (Sho: "It was awesome!") while I stayed behind and took a bath with Saya in the B&B. We shared dinner with Saito-san, discussing the possibilities for enlightenment and despair from spending months on a bike.
Posted by Charles and Sho at 7:11 PM